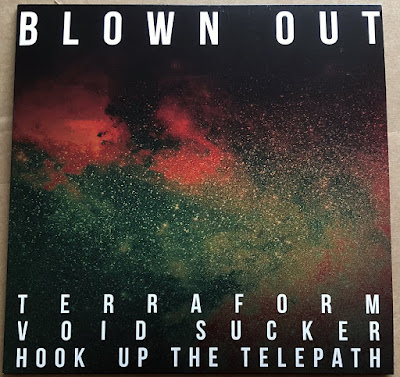 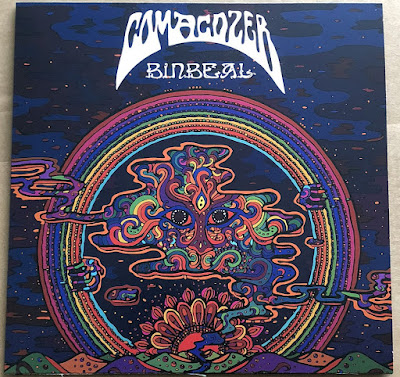 Just when I was on the verge of completely running out of things to say about Blown Out’s excellent but nigh-on interchangeable records, the band’s side of this split LP on Riot Season sees them shifting gear a bit, delivering three (three!) discrete tracks of faster, more riff-based material, interspersed with a few delightful passages of top quality after-burner amp roar.

Veering more toward the instrumental stoner rock approach taken by Mike Vest in his Dodge Meteor project with Matteo Dainese, Blown Out’s recordings here put me in mind of what the classic era Monster Magnet line-up might have come up with, had Dave Wyndorf buggered off for a while and left them to their own devices.

As far as rhythm sections go, John-Michael Headly and Matt Baty have been “in the pocket” so long they must have repainted it and ordered a new sofa by this stage, so it’s super-cool to hear them speed up a bit on the latter two tracks here, hitting a slightly more trad head-banging groove, as Vest’s diesel-soaked candy-floss fuzz riffs rain down like sugar-choked static and phased out/space echoed lead lines spiral off into twisted, deep space oblivion.

It’s totally sweet – as fiery as anything this band have ever recorded; this is a slightly more ‘accessible’ sound than their customary side-long wig-outs perhaps, but there’s nothing half-assed about the world-eating skree that takes over each time the drums drop out.

The bawling, multi-layered blast of ‘Hook Up The Telepath’ in particular makes me unreasonably excited to hear where these guys will go next, but, for now, this is immense - pure space-rock nectar, straight from the source.

On the other side meanwhile, I confess total ignorance of Comacozer’s line up, history or geographical location, but for some reason their name and single, side-long track had me expecting some seriously furry, bong water-gargling stoner/doom kinda shit.

Colour me happily surprised then upon discovering that their seventeen minute ‘BinBeal’ is actually a pretty benign affair, with a gently propulsive Cecil McBee-via-Hawkwind bass groove taking centre stage, ranging hither and yon ‘cross an interplanetary landscape, accompanied only by shards of hard-echoed, clean toned guitar dopplering away into the distance and some low level patches of DikMik style primitive electronics hovering into view now and again. It’s all very pleasant.

About two third of the way through, there’s a ‘loud bit’ where the inevitable fuzz barges in for a while, and, whilst this is perfectly good fun, to be honest it feels a bit surplus to requirements, breaking the pulsing spell of the proceeding jam and taking the band perilously close to essaying a psychedelic rock take on the kind of unutterable tedium practiced by Mogwai and their ilk.

Basically though, it’s all really cool – a swell example of bombast-free contemporary rockage, and a welcome reminder that not every space-rock track needs to be a one way power blast through the centre of a black hole. As stated, this one’s more like an easy afternoon’s meander around a habitable planetary surface, maybe just encountering an easily dispatched crab monster in a cave or something during the loud bit. Lovely stuff - it too comes highly recommended.

‘In Search of Highs Volume # 1’ can be sampled and purchased via Riot Season. 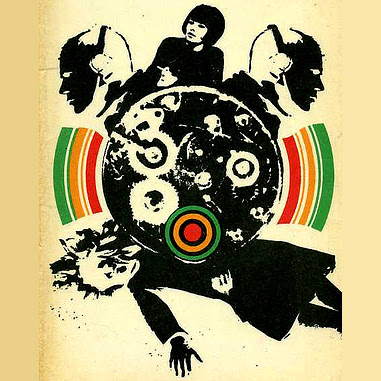 Well, I’ll keep this short folks. Just about every surviving music blog/website I follow has been branching pretty heavily into the arena of podcasts and playlists in recent years, and as such, I just couldn’t help myself – I’m back on the (fake) airwaves.

A (nearly) two hour imaginary radio show, complete with talking and bed music and everything, hopefully perfect to throw on whenever there’s nothing good to listen to on the real radio, this can be streamed via the mixcloud embed below, or via my page on that site, or can be downloaded in ever-glorious mp3 format from here.

Maybe there will be more of these, maybe not – let’s see how it goes.

And, in the background behind the blather: