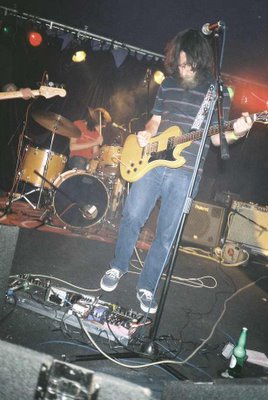 Black Mountain’s Stephen McBean. “Hey man, this indie-rock is getting’ stale… let’s grow beards, spend all our money gnarly over-priced pedals and be, like… stoner rawk!!” 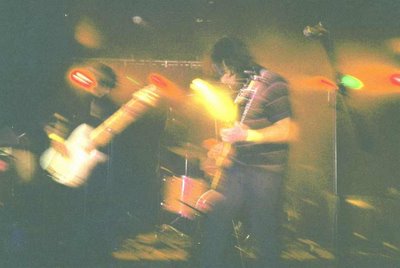 Amongst their shamble-ass Hawkwind / Syknyrd pastiches, there were a few moments when Black Mountain did manage to summon up a moderately impressive bit of rock – I’d like to think this photo was taken during one of them. Either that or someone just pushed me sideways while I was taking it – either way, result. 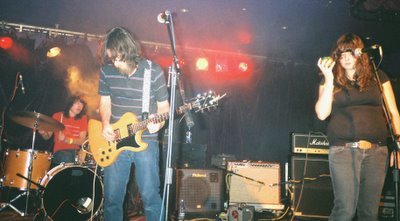 I like this picture cos it features Black Mountain’s chubby-and-proud-of-it lady member. In true patriarchal ‘70s rock tradition, she didn’t actually do much. 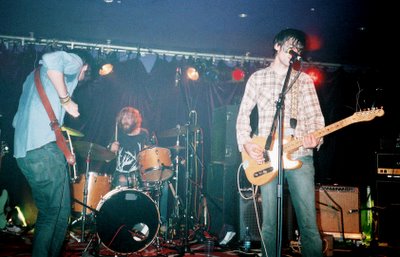 Dead Meadow in full ragin’ psychedelic power trio effect! Don’t be misled by their rather lo-fi stage presence, the music these guys make demands ten foot high Orange stacks, a full Acid Test light-show and a natural amphitheatre in the Himalayas at the very least. 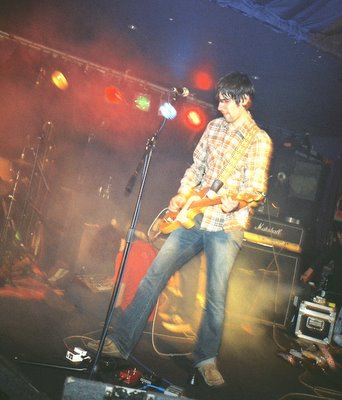 Jason Simon launches into another mind-flaying, fuzz-fucked wah-wah solo. Can you hear the WEEEeeeAAAaaaaWWGgggHHHeeee? What a fuckin’ hero. 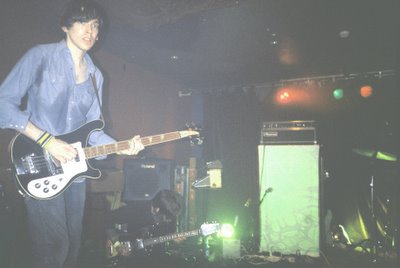 Fresh-faced ‘Meadow bassist Steve Kille. Check the Rickenbacker, the haircut, the low budget psychedelic lighting effects and the unidentified dude mucking about on a 12 string? I think I might try and pass this off as being taken on Sunset Strip circa ’67 or something… a rare shot of The Mung Beans in action possibly? I think the amplifiers probably give it away.
Posted by: Ben / 9:28 AM (0) comments

Firstly, the venerable and generally excellent online music zine Perfect Sound Forever, which features masses of lengthy, interesting and unpretentious articles about subjects which are slightly off the beaten track; this piece about the history of the Red Dog Saloon and the Fabulous/Amazing* Charlatans being a perfect example, and essential reading for all '60s counter-culture fiends.

(The Charlatans version of Buffy St. Marie’s song ‘Codine’, one of the few tracks released by the original line-up, can be found on Volume 4 of the Nuggets box-set, and is amongst the most blissful 2 minutes and 12 seconds of music you could hope to hear – sounding like a more spaced-out acid/garage take on the same kind of roots-influenced hybrid that The Band cooked up a few years later, it’s a goddamn tragedy that the group never got it together to follow up their initial inspiration, because, man, that one track hints at something really special going down... and that above article is as good an excuse as any for me to tell you about it.)

Secondly, I’ve been getting up to date with the never less than righteous truths posted by Kid Millions on his journal on the Oneida website. Truly friends, here is a man who knows where it is fucking at. (And I reckon his appraisal of the Grateful Dead is pretty spot-on too.)

*Accounts seem to vary as to the actual name; suffice to say, NOT the '90s British band The Charlatans, god forbid I should ever waste any ink on them.
Posted by: Ben / 2:09 PM (0) comments

Reviews of this record would have me believe that it features a unique lyrical wit and an enjoyably innovative approach to song-writing and instrumentation. Actually listening to it on the other hand tends to confirm that it in fact sounds like some apathetic Oxbridge graduates mumbling over some half-hearted lap-top doodles. Now look - I’ve got a nice vinyl copy of Led Zeppelin IV leaning on my hi-fi shouting “PLAY ME! PLAY ME!” and I don’t have time for this crap, so if anybody wants to put forward some convincing reasons why I should bother listening past track 4, email before it’s too late.

Second and apparently final broadside from this gang of Drive Like Jehu / Rocket from the Crypt alumni (who surely know their way around a good band name if nothing else), and it could just be one of the best punk-rock records I’ve heard in a lean year for such things. They like to pitch their racket about half way between year zero California street-punk ala Crime or Fear and more contemporary tetchy post-hardcore stylings. The drums and rhythm guitar blast along like an absolute bastard in a concerted effort to break Husker Du’s Land Speed Record, the vocals are venomous, abstract and sloganeering and the lead guitar soars, crashes and burns in classically constipated Fugazi/At the Drive-In type style, whilst the tip-top production gives things an enviable QOTSA crunch. It might lack the ramshackle teenage spirit I like from my punk, but then these guys are far from teenagers, so I'll let them off. If you’re planning on escaping from your miserable existence in a middle-American town by doing 120 down the freeway at night after emptying a bottle of bourbon and then careering off the road toward cathartic, fiery destruction any time in the near future, you could do far worse than this for a soundtrack.
Posted by: Ben / 2:35 PM (0) comments