Believe it or not, I was planning to hit “publish” early this week on a post entitled ‘Collective Deathblog’, rounding up thoughts on the passing of several noteworthy musicians over the past few weeks. Needless to say, following certain tangentially music-related events this weekend, that title now hardly seems prudent.

To give the elephant in the room a good kicking then –

Whilst I am painfully aware that the events that put a damper on most of our weekends are directly comparable to those that currently hit a number of nations in the Middle East on a semi-regular (or indeed actually, definitely regular) basis (usually directly or indirectly supported by one or more Western or Eastern power blocs, and almost never accompanied harrowing eye witness accounts in Western media), it nonetheless hurts like a blow to the stomach to see such violence perpetrated within, I hate to say it, ‘our’ world - within a context that’s familiar to any of us who have spent time attending big-ticket gigs in capital cities.

As a friend pointed out to me on Saturday, we might not know anyone who likes The Eagles of Death Metal enough to go and see them in Paris, but, as people who have ended up drawing the majority of our peer group from among fellow music fans, how far do we need to go through degrees of separation before we find someone who does, or maybe did?

Complacent and over-protected as we – ahem - ‘young people’ on this side of the world generally are, the uneasiness and hollow-stomach feeling prompted by running such thoughts through our heads is not welcome, and the idea that said feeling may eventually become a pretty common one as the now-officially-noticeable slide toward global chaos continues is something I find very difficult to face.

There may be everything left to say, but there’s also nothing to say. Having no desire to add to the mountain of disposable chitter-chatter any more than I already have done, let’s just say that we here at Stereo Sanctity second the words of Simon HB at XRRF for rhetoric, and refer readers to Jeremy Allen’s piece at The Quietus for purposes of sobering personal context.

The post I was originally going to write today will hopefully be up soon. 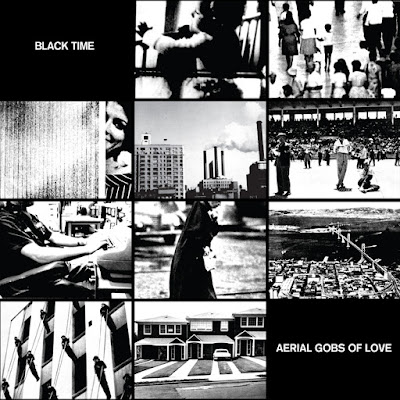 According to most sources, Black Time ceased operation in around 2011, despite sporadic rumours to the contrary. Word on the street is that no Black Time music has been recorded since the ‘More Songs About Motorcycles & Death’ EP appeared in 2010.

These being the facts as we know them, it comes as somewhat of a surprise therefore that, during 2015, I have seen Black Time play live on two separate occasions, and have taken delivery of a ‘new’ Black Time album, released c/o the Stockholm-based Förbjudna Ljud Label.

Could Black Time be the world’s first undead band? If so, you’d be hard-pressed to find a better candidate for the position, and I for one remain extremely grateful for their continued half-life.

You see, back in the long-gone late ‘00s, when Black Time were alive and kicking and fully operational barely a forty minute tube journey from me, I, like an fool, ignored them – an idiotic decision that I now regret almost daily.

I recall streaming a few of their songs off Myspace, perhaps when contemplating attendance at an event at which they were performing, but, fickle bastard that I am, they did not fit fit my agenda at that particular juncture. Perhaps I even took a few moments to moan about the alleged drawbacks of “fake lo-fi recordings” or somesuch, missing the point by a fucking mile, as per usual.

I began to warm to Black Time a bit when aforementioned EP came out, and then, a little while after that, a wise lady came into my life bearing several Black Time LPs, which she had the foresight to leave in my flat for an extended period; planted like a timebomb, just waiting.

Like Comet Gain, The Make Up and no other popular music groups, Black Time ducked the all too obvious trap of ‘60s retro-fascism and saw how they could use its stifling vision to their own ends, stripping it down and reassembling the pieces in their own image – a protective shell against the contagious rot of 21st century disappointment, powering forward toward a bleak future whilst Out-Cooling the opposition at every turn.

That their main man styles himself ‘Lemmy Caution’ might seem a bit ‘on the nose’ for crime fiction fans, but as I don’t know his real name, I guess we’ll have to live with it. I certainly can’t fault his taste in nomenclature, anyway.

Meanwhile, life having changed immeasurably in the interim since that ill-thought-out Myspace dismissal, the noise within these records – an unapproachable mixture of venomous, Sunglasses After Dark punk rock, n-th generation Link Wray-via-The Fall twang and assaultive, blown out noise shit - now appeals to me a great deal.

Clattering, frustrated, chaotic and impassioned, wreathed always in an aura of mildewed tape decay and careless abandon, Black Time’s music certainly makes for a challenging listen, but there is a kernel of white-light awesomeness within it that further reveals itself on each new spin, like wallpaper stripped from brick, unveiling a blueprint for a whole new order of unfiltered, subterranean rock n’ roll, cut almost too raw for public consumption.

Listeners who express alarm at the thought of clipping levels, incomprehensible vocals and one mic drum recording are advised to avert their eyes and just keep walking, but, for those of us who still get unreasonably excited by moments on records when someone hits a fuzzbox and everything just goes beserk, Black Time are/were a god-send - a “for madmen only” brew of trash, blare and discontent that makes me rue my repeated failure to experience it happening at close quarters just a few years ago.

And, well, apparently Black Time must have heard my cries of regret in their slumber, for here, suddenly, we have ‘Aerial Gobs of Love’, fresh from some Swedish pressing plant, delivered straight to our perverted English ears.

Ostensibly a collection of unreleased material recorded circa 2009-11, this LP sounds so much like such a cohesive, deliberate piece of work that frankly I suspect it might actually have been laid down in some sudden fit of unforeseen inspiration a few months ago… but who am I to speculate thus.

Either way, the blasted beauty of the opening title track coruscates like a brillo pad – a fantastic, wide-eyed sheet of sky-staring, optimistic noise, before ‘More Pricks Than Kicks’ follows, returning us to Black time’s more familiar discomfort zone of self-destructive urban frustration via a bad-tempered Cramps-ian fuzz stomp, retooled to reflect the violent, lip-chewing residue of a thousand shitty North London nights. ‘Black Chant’ covers similar emotional terrain, but expressed instead through a massed chant of defiance, a feedback spewing riff beatdown folding into a massed snare-roll lament, like a gang of EVP ghosts calling out the living for their oafish ways.

Like many a Black Time number, it’s over before you even know what to think about it, and on we march. ‘Industrial Anxiety’ is more fun than it sounds - Maps-ian rant and toothache distortion – whilst ‘No Expectations’ sounds like a lost ATV song channeled from beyond the grave via a payphone. Jams having thus been given a reassuring kicking, Side # 1 takes a sharp left turn to close with ‘Tarzan vs IBM’, a perplexing collage of sub-Suicide electro-primitivism and rogue 16-bit computer skree that still somehow ends up becoming strangely affecting, like some CCTV dance of the robots.

The album’s B-side will no doubt prove alienating for less adventurous rock n’ rollers, but you know what, fuck ‘em. Another frustration tirade, and a pretty epic one at that, ‘Flakes’ introduces – whisper it – acoustic guitar for a few strident verses, recalling the angry resignation of some of Comet Gain’s ‘City Fallen Leaves’ material in between outbursts of cathartic bombast. Blessed with a superbly abrasive, nasal roar, Mr Caution always sounds as if he’s straining against the leash of a restrictive, compromised world, striving to destroy his life as means of escape, and he has rarely sounded as unhinged as he does here. Probably I’m willfully missing a metaphor or two for the sake of comic effect, but it’s near hilarious to hear him apparently lambasting falling snowflakes for “wasting [his] precious time!!”. Eat that, emo kids.

Built around a slowed down take on the riff from the A side’s ‘More Pricks..’, ‘Winged Serpent’ feeds a ‘Grotesque..’-era Mark E. Smith answering machine monologue into a headache-inducing tunnel of aural grue, before the next few tracks take us further down the wormhole toward pure abstraction - dazed, disconnected chunks of cacophonous fake-dub racket that seem to have been recorded in a shower block in the depths of hell.

Before more errant noise ends the set, ‘Cave Paintings’ briefly busts through as elegiac and defiant as you like, again evoking Comet Gain via a rare example of flagrant self-mythologising that actually stands tall and works like it should; “Gonna lay it down / the bitter truth / we existed / and here’s the proof / Saturday gigs, European trips / and Dave he was / a first class cunt.”*

In a way, it is ironic that only on this apparently posthumous effort that we see what’s behind the curtain when Black Time ditch the comfortable necessity of being a “garage rock” band and let their wilder and more indulgent impulses run free, finally settling fully into the weirder corners of their own sound.

Pretty much entirely off the map, they’ve found a sonic Pitcairns Island located somewhere in-between the legacy of New Zealand’s Xpressway label, the obtuse genius of Jim Shepard and the holy legend of Swell Maps. Amid a distortion-caked compendium of misfiring ‘80s computers, poorly wired amps, degrading tape and early morning practice room blues, they’ve tapped into a septic vein of raw, weird, desperate emotion, hiding just below the shades of reappropriated cultural memory, scratching forever at the walls of what passes as “rock music” – and of everything they’ve ever done, this LP perhaps captures it best.

Black Time were one of the best bands in Britain, period. And since they've split up, they just keep getting better. Go figure.

• Since I’ve just about exhausted it in the review, it’s worth crediting Doug Mosurock for his role in first planting the now-seemingly-obvious Black Time / Comet Gain comparison in my mind.