Alexander Tucker is a forward-thinking doom metal scholar who dwells somewhere indeterminate along the South coast of England. The ATP record label here presents an album of his multi-layered modal acoustic guitar-based compositions. For the interest of anybody still reading after that description, I can confirm that this is indeed a thing of mighty greatness. In fact, It feels a bit like meeting a sulking Pagan god in a trench on Brighton beach in the depths of winter fifty years after an extinction level apocalyptic catastrophe. There are moments when Tucker’s guitar sounds like John Fahey playing Black Sabbath (no jive!), and violin, accordion, percussion and assorted other strings and drone textures are steadily added to proceedings, creating a distinctively weird sonic palette that will prove familiar to fans of other classification-defying folk-affiliates such as Scatter or Bablicon.

For me, the weakest element here is the vocals, with Tucker’s Fursaxa-esque mutated madrigals often seeming superfluous amongst the towering webs of instrumentation, his Vicar’s son pronunciation rather undermining the brooding, pagan atmosphere. Perhaps he just needs to work on this though, because when the vocals do find their niche within the music, on the relatively modest ‘Of Late’ or the overwhelming gothic dread of album highlight ‘Phantom Rings’, the results are incredibly impressive, illuminating a cross-roads between the dark medievalism of European folk and the ritualistic repetition of metal song structure so powerful and seemingly obvious that it’s surprising few other musicians have thought to set up camp there.

This is strange, stirring, ambitious stuff basically - I have a suspicion Alexander Tucker has been grinding down chips from monolithic standing stones and snorting them. My CD player may say 48 minutes, but this album seems like it goes on forever, drifting ever deeper into the darkest psychedelic winter reveries I’ve heard for many a moon.
Posted by: Ben / 2:40 PM (0) comments

I've got various exciting gigs and other things to report back to you about, but whilst I'm finding time to write about them, I'm going to try and attempt another review-every-day week. Ok, GO!

Been meaning to give these guys a good listen for a while. Thought I’d take a chance of this album (their fifth presumably) thanks to the awesome artwork and a cover of the West Coast Pop Art Experimental Band’s ‘I Won’t Hurt You’. (Friends of the WCPAEB = friends of mine!) I’m sure glad I did - this sounds like a lost mid-‘70s Neil Young & Crazy Horse session where they hung out on the porch after a few beers and spliffs and decided to reconnect with their ‘60s garage-pop roots via some sweet, laidback, groovy rock n’ roll. Hang on, you’re thinking; a 21st century band who sound like a ‘70s band trying to sound like a ‘60s band? Yeah, I know, I probably couldn’t find anything less ‘important’ or revolutionary if I tried, but fuck it, I know I’m gonna play this loads.
Posted by: Ben / 12:31 PM (0) comments

a) I've been asked to do some posters.

b)I've got my scanner working again. 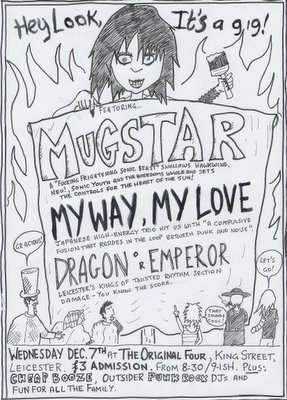 Bob Dylan played at Nottingham Ice Arena the other night. Chris Summerlin couldn't get in, so he went to see some cathartic shouting and a man breaking glass on his face instead. He wrote this article chronicling his thoughts on the matter, and you should read it, it's great.
Posted by: Ben / 2:02 PM (0) comments

It’s like some torturous anxiety dream; you’re in a dark, crowded rectangular room waiting for the best band in the world to play, but you’ve got to leave at 11:20 to get the last train. The clock’s steadily creeping past ten, and some gang of grinning goons is still on stage wasting your time with a load of self-indulgent, joyless garbage. Under other circumstances I might be more lenient toward the Modified Toy Orchestra (does exactly what it says on the tin, and might have been funny for about half an hour after they came up with the idea), but please guys, goes the psychic plea aimed in their direction, COULD YOU PLEASE JUST FUCK OFF?

Thankfully they eventually do, and we get to see about 40 minutes of Melt Banana's set. And yes, it’s still hyper-real sci-fi punk rock heaven, the music still explodes out of them like a pure fireball of WOW, and still more fucking fun than… pretty much anything. This is the third time I’ve been lucky enough to see Melt Banana, and somehow – I’m not sure know how, but I’ll do my best to try and explain it – this is the first time I’ve seen their untouchable edge slip, the first time their super-human mystique has started the evaporate. Why? Well for one thing the sound is punk-rock-venue muddy - a lot of Agata’s mind-shredding guitar moves and any hope of decoding Yuko’s lyrics are lost in the wall of noise. This time they’re decked out in drab combat gear rather than the cocktail dresses and surgical masks of previous tours. The new drummer does the job ok, but he’s not quite as fast or hard as grindcore legend Dave Witte (?) who was touring with them last time ‘round. They don’t seem to be jumping up and down so much either – but then neither am I, I’m too tired. Niggling details, but when you’ve got a reputation to maintain as the best band in the world, these things matter. Maybe it’s just that for the first time since I saw them at the Garage three? four? years ago, I’m close enough to the action to notice these imperfections – and back then I was yet to become a devoted fan, so expectations weren’t so sky-high. Thinking back to the frenzied, mystical effect gigs like this used to have on me a few years back, it seems a blessed miracle that I considered leaving before the band had finished to be a better option than taking my chances on the freezing streets of Birmingham ‘till sunrise.

Melt Banana are still unspeakably incredible, but for me personally – weighed against the mind-blowingness of my previous experiences with the band, and due to various minor annoyances – this wasn’t a classic gig.

Threatened by the multimedia feast that is Alex’s weblog, I was hoping to enliven this gloomy post with some photos I took at the gig after finding myself catapulted to the front row. The photos didn’t come out at all – such is life – but I’m still into the idea of showing the world some Melt Banana photos, so here some really good ones somebody else took, at a different gig. Check 'em out.
Posted by: Ben / 10:12 AM (0) comments

I've spent a load of time over the past week or so putting together my Christmas list for my family (as requested).. as usual, there are no 'big things' I particularly want, and if there were I'm probably prefer to source them out myself, so basically this = an exhaustive list of sub-cultural garbage that I'd quite like to get my hands on.

This time round I've been making things easier for my long-suffering relatives (and de-valuing the ideal of christmas gift-giving yet further) by doing the rounds of internet shops, making sure I'm putting things on my list that actually exist and are within the reach of mainstream retailers, as well as confirming authors names, putting year & director on films to avoid confusion etc. etc.

So I've finished, and it's pretty cool list. Save the file to disk - hurrah. Open it again a few minutes later so I can send it out..... fucking file's corrupted and I can't open it!! SHIT! Now I've got to start again, with those all-important shoppingdaystillxmas slipping away.

I think I'll just tell them to buy me something big, black and evil that has horns, makes noises like a sitar and projects mesmerising multi-coloured lights onto the wall and have done with it.
Posted by: Ben / 12:36 PM (0) comments

"There are other ecstatic religions in the world, or religions with the same continuum (Hinduism), but is Christianity really intrinsically ecstatic in this manner of hot enthusiasm? Are these tambourine players and guitar screamers inhabited by Christ? Do they know him? I have to say that, Flannery O'Connor not withstanding, underneath it all i hear a pan pipe and a cloven hoof beating time."
-John Fahey, August 1997