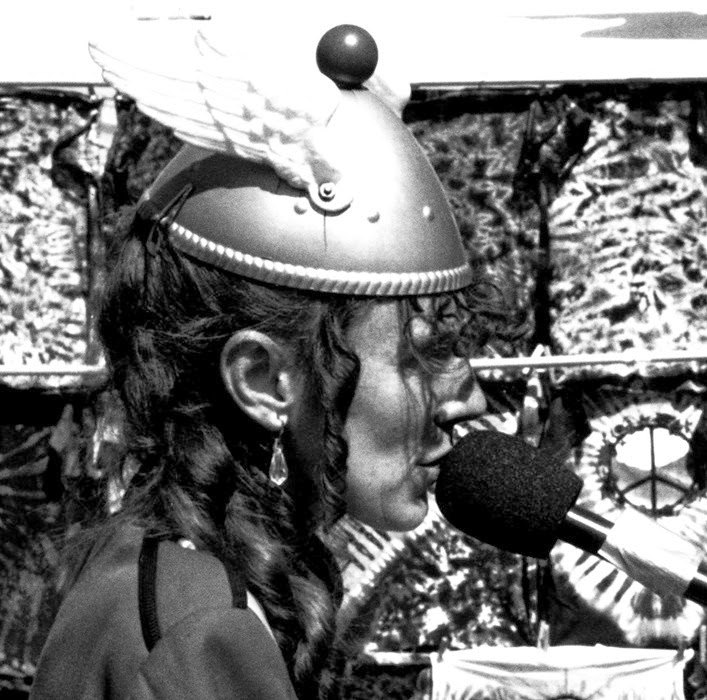 One of the most welcome surprises for me in 2013’s heavy calendar of comps and reissues was the emergence at the end of the year of ‘The Space Lady’s Greatest Hits’, which as far as I know marks the first time that more than a song or two from said lady have hit vinyl, or become generally available CD/mp3. Nice work, Night School Records, nice work!

Like most other interested parties I’d assume, I was first introduced to the music of The Space Lady via Irwin Chusid’s ‘Songs in the Key of Z’ compilation – not a collection I’d wholly commend to you either musically or ideologically, but The Space Lady’s unique readings of ‘I Had Too Much To Dream Last Night’ and Peter Schilling’s novelty hit ‘Major Tom’ were definitely the tracks on there that stuck with me the most; beautiful and foreboding, heavily psychedelic arrangements of the songs, imaginatively rendered via cheap Casiotone and a haze of effects, and intoned with a plain, hesitant, yet oddly intoxicating female monotone.

A quick scan of the sleevenotes before the comp went back to the library informed me that The Space Lady was a former San Francisco street musician, a sci-fi fixated escapee from the late ‘60s Haight Ashbury apocalypse, and well, say no more really. A perennial mix tape favourite was born.

Barring obvious geniuses such as Moondog and Captain Beefheart, I would be extremely unlikely to get excited over the prospect of owning an LP collecting the works of most of the other artists included on the ‘..Key of Z’ comp, but unlike many of the uncomfortably damaged savants therein, The Space Lady’s contributions made for genuinely delightful listening that stretched beyond mere novelty value. Calming and introspective as their New Age origin demanded, yet fully cogent of the transformative power of verse/chorus pop music, they evoke the fading ghost of San Francisco’s gentle psychedelic idealism, returning to haunt a new, impoverished world of dimestore electronics, frail 30-something uncertainty and rhinestoned glam-rock bombast.

Key to The Space Lady’s musical identity I think is her history as a busker. Where so many other post-hippie drop-outs retreated into New Age synth abstraction or cultish Christian mysticism as the ‘70s comedown hit home, Susan Schneider’s trip was focused firmly on playing to the people: doing big, easy tunes that would be recognised by passersby, magnetising a few dimes from the throng SF’s commuting populus. For music that is so obviously birthed from a life-style of spaced out flower-child journeying, there is a heroic lack of self-indulgence to Schneider’s performances, and her desire to entertain is very much reflected in her repertoire, which in addition to Schilling and The ‘Prunes also encompasses ‘Born To Be Wild’, ‘Radar Love’, ‘Ballroom Blitz’, Steve Miller’s ‘Fly Like An Eagle’ and (best of all) ‘Ghost Riders in the Sky’, all beautifully rewired via the stuttering drum machine and eerie cadences of Schneider’s own unique MO.

Less ‘cover versions’ in the rock band sense, these songs are more melodic skeletons around which Schneider can build her own sonic universe – an shaky pencil line linking the lost & lonely cloud-folk of Linda Perhacs to the shredded DIY electro-punk of The Screamers, via an unlikely trek through the fuzzier corners of America’s early ‘80s MOR radio-waves, with material carefully selected to combine popular appeal with opportunities for The Space Lady to stretch her musical expression into stranger and dreamier waters than FM rock/pop would conventionally allow, tripping out into the furthest depths her pedals would allow, whilst all the time singing of flying through the clouds, blasting through the heavens, blinking through into dreamland, in a more solemn and direct fashion than the composers of these songs may have originally anticipated.

Another aspect of The Space Lady showcased on her Greatest Hits though is that of her ‘originals’, several of which sit alongside the covers. Well, sort of, anyway. A key figure in The Space Lady’s mythology is that of the perfectly named Joel L. Dunsany (any relation?), Schneider’s former partner, who is now sadly no longer with us. The sole composer of the remaining three songs on the LP version of ‘Greatest Hits’, it was Dunsany who inadvertently inspired the ‘Space Lady’ concept in the first place, as is outlined in Schneider’s highly entertaining sleevenotes:

“Since we had destroyed our IDs, were living under an assumed surname, and were generally terrified of Joel being caught for draft evasion, life became a hand-to-mouth scramble for existence. With the idea of making big money as a rock star, Joel put together a one-man-band act of experimental music, running his guitar through an Echo-Plex and wearing a silly looking winged helmet he bought in a San Francisco costume shop. The helmet wouldn’t have been so bad I thought, if not for the red ball on top; and worse yet, Joel had the audacity to wire it up to a blinking bulb. Crowned with that embarrassing spectacle of a topper, he dubbed himself ‘Mount Helium Pegasus,’ and began looking for places to play.”

Unfortunately for us all, bookings for Mount Helium Pegasus were rarely forthcoming, and future classics like ‘Synthesize Me’ and ‘From The Womb To The Tomb’ were soon relegated to the box cupboard along with the winged helmet and the echoplex. The fugitive family still had to eat though, and after a further decade or so of scrapes, misadventures and Close Encounters, it was to that same cupboard that Susan Schneider returned, taking to the streets, humbly reinventing the remains of her husband’s rock star dreams armed with a Casio MT-40, a camera tripod and a brace of 9-V FX boxes that the hippies could only have dreamed of.

What resulted is a beautiful and engaging reinterpretation of popular music, consumer electronics and cosmic ideology, and a joyful listening experience that easily overcomes any patronising notion of ‘outsider art’. The Space Lady’s Greatest Hits is a self-evident classic of home-made psychedelic spirit that transcends any earth-bound genre conventions, flying free like a glowing beacon of maternal human warmth and gentle pop wonder through the dark of the cosmos. HIGHEST POSSIBLE RECOMMENDATION, to coin a phrase.

(I’m kinda on the fence as to whether or not it will be a good idea for Schneider to resurrect her Space Lady persona for a trip to the UK in support of this record in a few months, but it gains her some belated recognition for her music (and some dough), well, that’s all to the good, and if there’s a chance I can pass her a cheery word and get my LP signed, all the better. So see you there, I guess.) 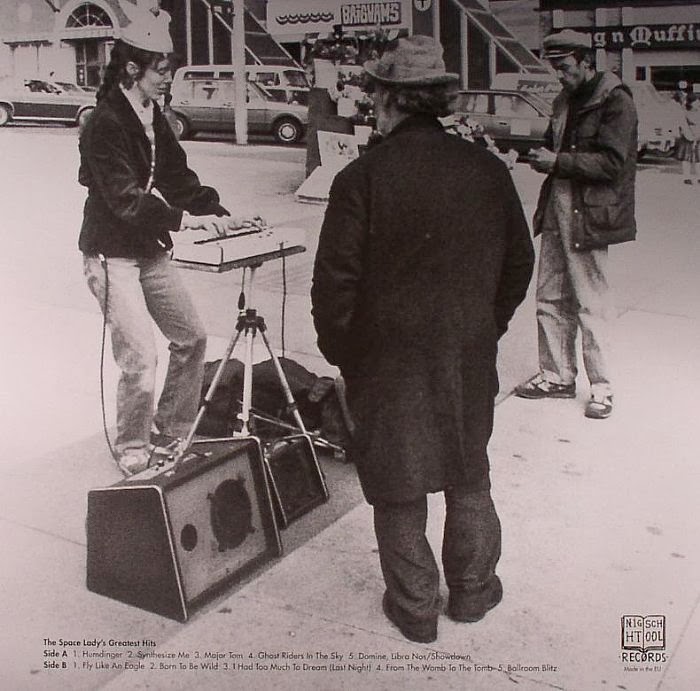 Listen to The Space Lady doing ‘Ghost Riders in the Sky’ here, and watch her perform ‘Major Tom’ here.


Read a recent interview with The Space Lady at The Quietus here. 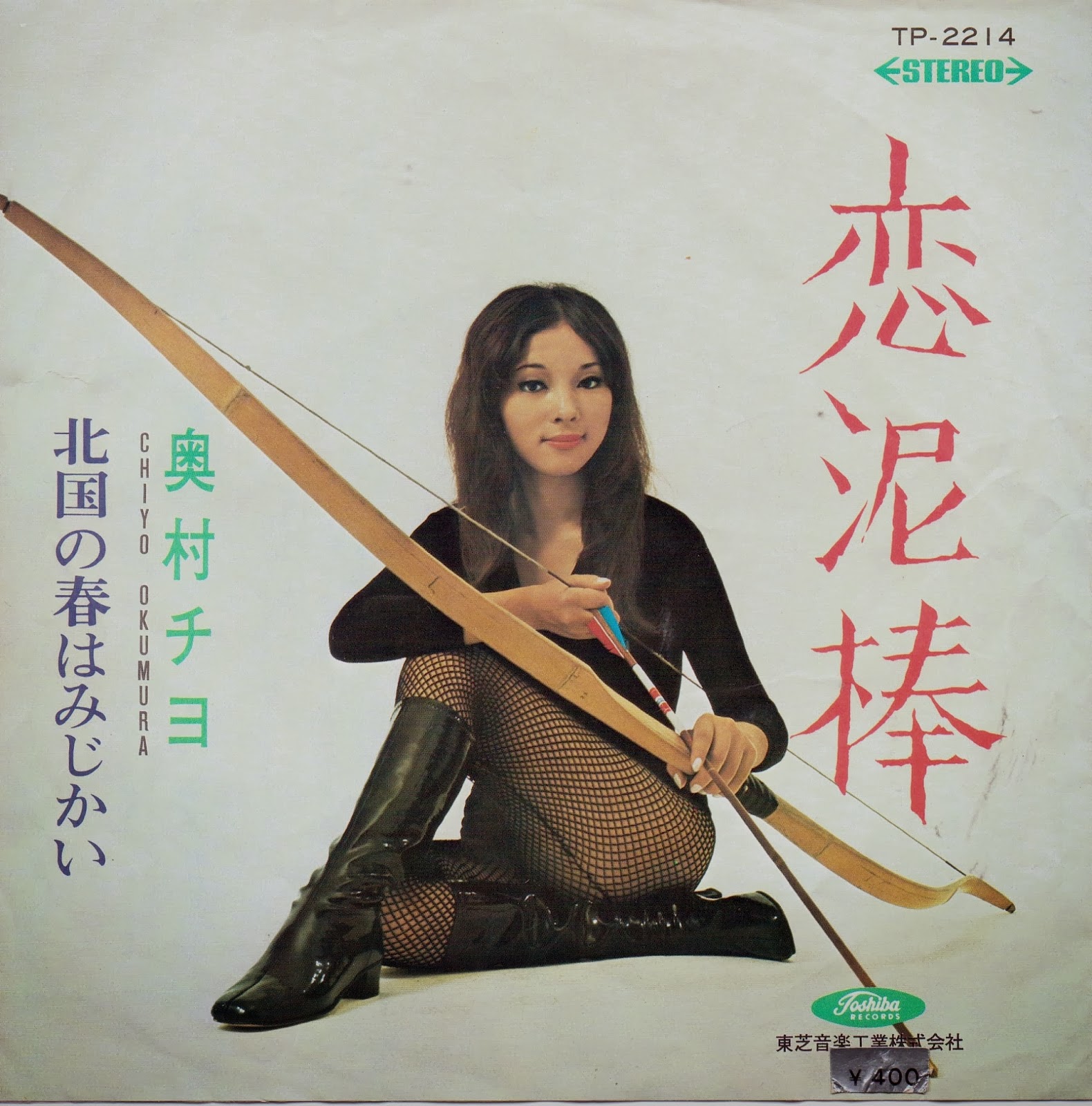 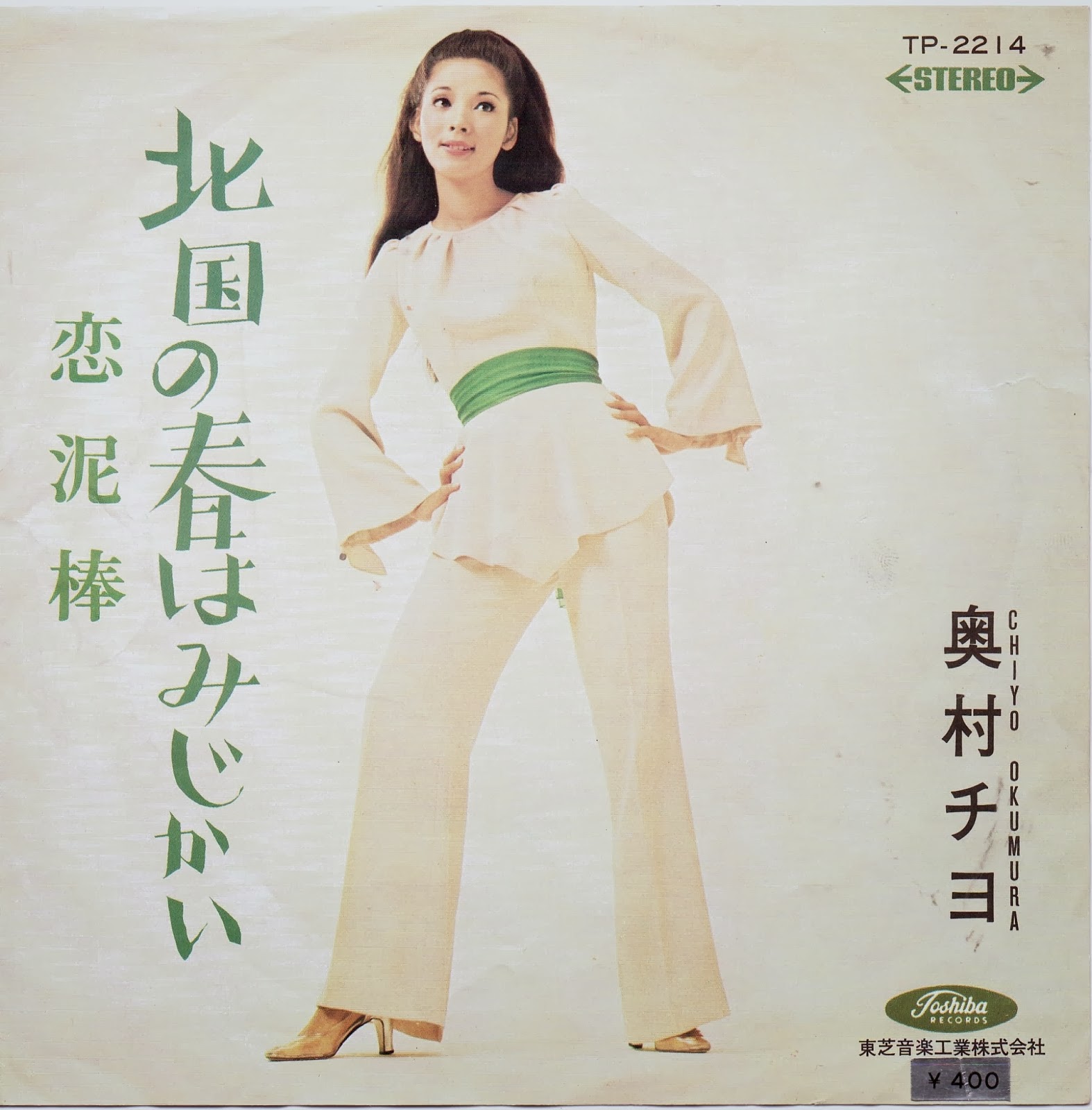 One of the best things about visiting Japan is the opportunity to experience (and bring back a chunk of) the country’s vast universe of indigenous pop culture. One of the strongest and most self-sustaining entertainment industries in the world, and one whose obvious linguistic and geographic distance from the Western hemisphere ensures that it remains largely untapped by the English-speaking world, this of course represents a kind of endless heaven of discovery for someone as unhealthily obsessed with such things as I am, and of course I chose to set about my investigations in the only way I know how – by spending an inordinate amount of time skulking about in second hand record shops, looking for cheap stuff with cool cover art.

And so, with the happy discovery that my spare turntable has a USB socket, now seems a good time to do this blog’s bit for the cause of cross-cultural understanding, as we present Japanese Record of the Month, wherein I will work through the small mountain of 7” singles I brought back with me, presenting them to you one by one along with whatever scraps of background information and fatuous, ill-informed opinions I can muster.

Within my stack of 45s, I’ve got ‘60s Group Sounds releases, heart-rending Enka ballads, a few examples of contemporary punk & hardcore that deserve a bit of wider attention, some film & TV tie-ins - but the overall emphasis is on miscellaneous solo artist pop, of a ‘60s/’70s vintage.

We’ll be entering into this endeavour in a spirit of total randomness, so hey, look what I pulled off the top of the pile today! To be honest, I know very little (read: nothing) about Chiyo Okumura, but gee whiz, what a cover! Thankfully, the music within turns out to be pretty good too… well, I mean, I like the A-side a lot, at least.

Opening with a slinky, conga-heavy rhythm and a genius little electric piano riff, adding chicken-scratch guitar on the verses, and keeping the strings n’ horns at a tasteful distance from the vocals and primary instruments, ‘Koi Dorobo’ (translation: ‘Love Thief’?) seems to hit that particular sweet spot where the drama of enka meets the upbeat, “struttin’ down the street” pulse of early ‘70s, post-Shaft/Superfly film scores. It is a very good place to be. Okumura’s vocal delivery isn’t particularly charismatic, but it’s nice and brassy and does just fine.

Whoever produced this record also clearly really, really liked that funny percussion thing that makes that particular sorta…. well I don’t know how to describe the sound really, but you’ll know it when you hear it. (What the hell is the thing that makes that noise called, anyway? As someone who routinely tries to describe music, it would be a useful thing to know. I kind of know the name, deep in the back of my mind somewhere, but, ah, it’s gone again…. you know, that 'sounds a bit like a wind-up wooden toy spinning around very quickly' thing. Please help me before senility sets in, readers.)

Anyway, ‘Koi Dorobo’ could so easily have played over the opening credits of some Toei Girl-Boss flick, and it’s certainly got more guts to it that some of the weaker numbers that began to occupy such moments as the budgets & production schedules of the movies plummeted through ‘70s. Definitely a keeper!

B-side ‘Kitagunino Haruwa Mijikai’ (meaning something like 'Spring in the North is Short’, perhaps?) is more of a ballad, or, I suppose, a kind of prototype power-ballad? It’s an ok enka-ish number, but Okumura’s vocal delivery goes a bit over the top in places I think and generally feels a bit blunt, whilst the melody seems a bit ‘standard’ and the production is a tad overripe too, meaning that the song never really connects on the kind of emotional level such material demands. Oh well - sometimes you play a B-side, you get a B-side, y’know. It’s ok. Highlight is the nice instrumental bit where a muted horn plays the main melody. 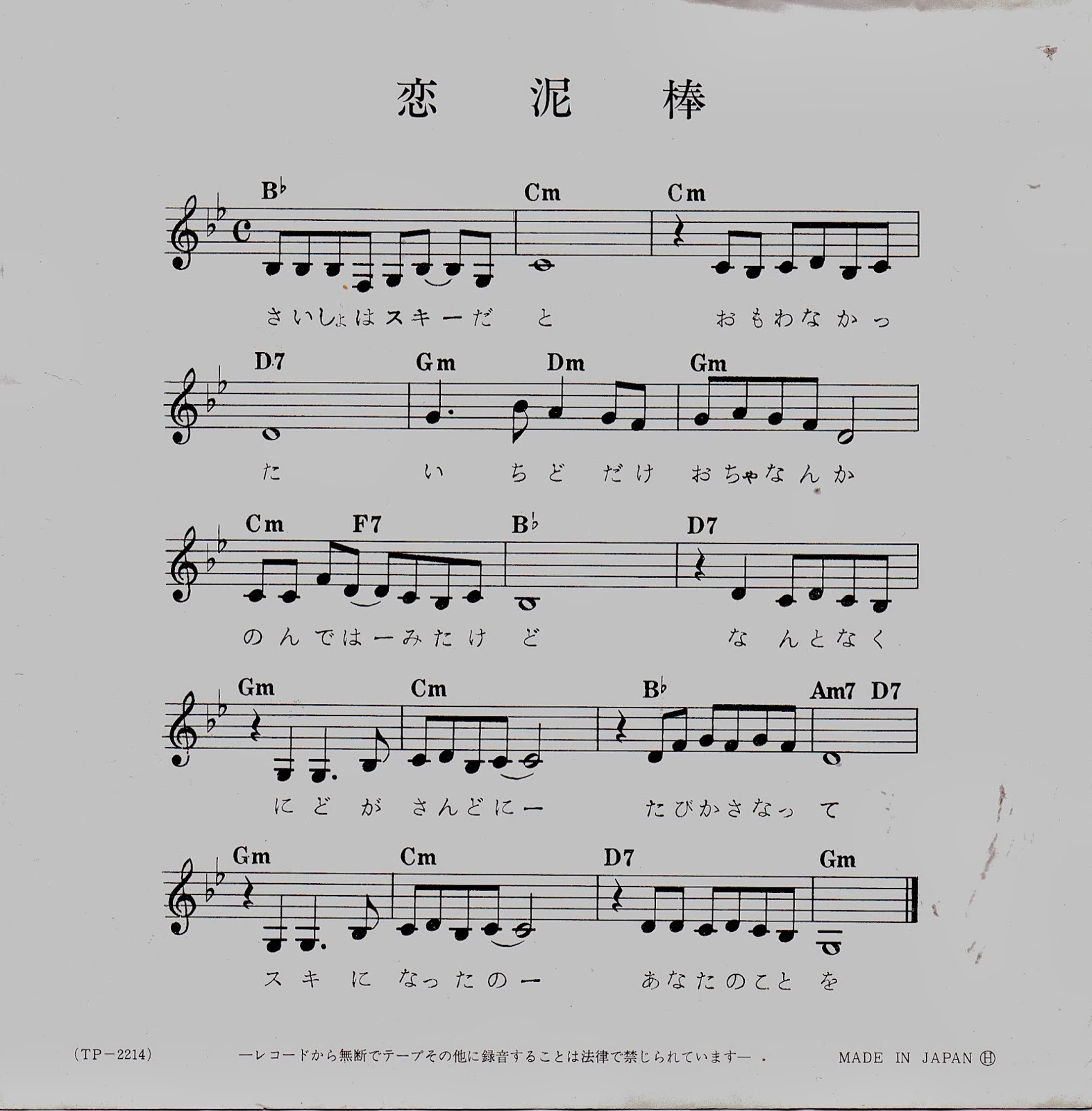 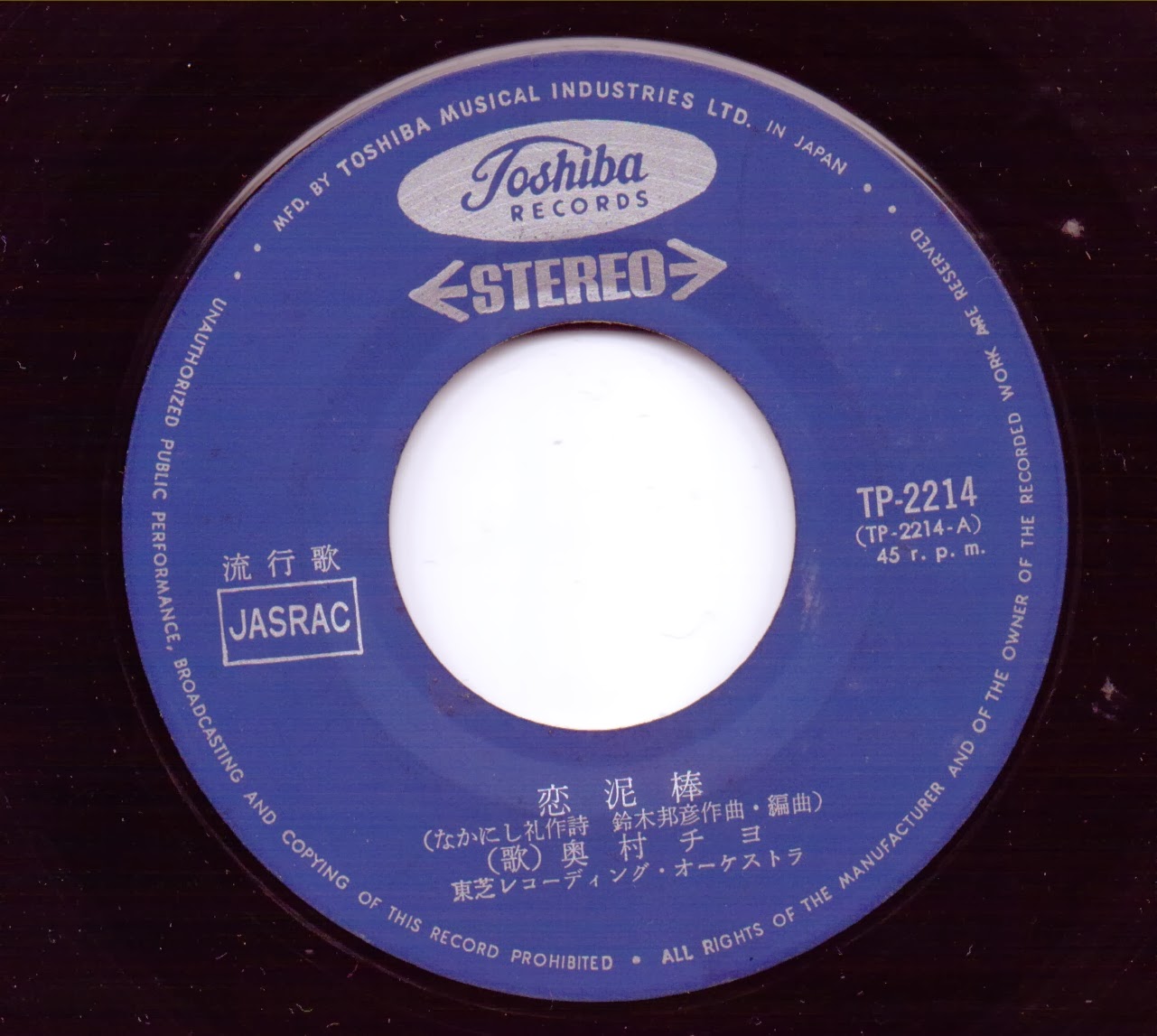