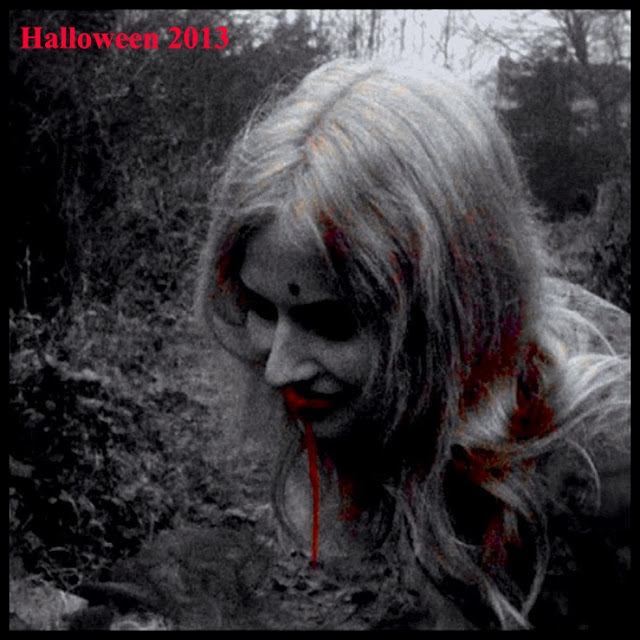 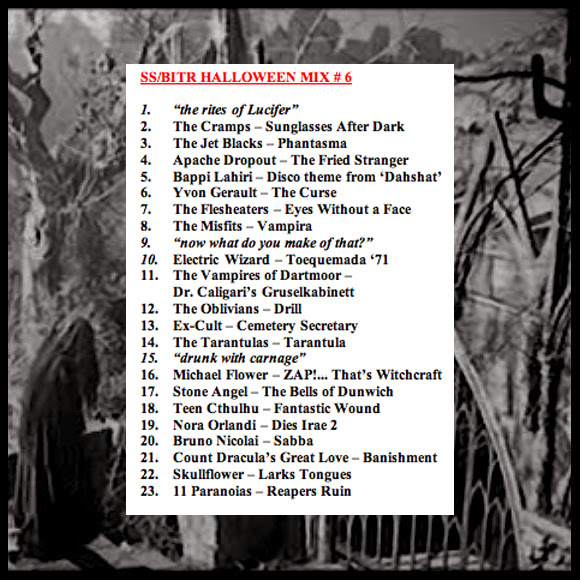 Presenting for your listening pleasure, the sixth annual Stereo Sanctity / Breakfast In The Ruins Halloween Mix!

I fear this year’s comp may prove a slightly more gruelling listen that previous years, for the simple reason that, after six years, I’m running pretty low on good, horror-themed rock n’roll songs, necessitating a move toward a greater proportion of soundtrack stuff, random instrumental creepery and general noise. Of course, there’s still old Halloween comp perennials like The Cramps, The Misfits, The Flesh Eaters and Electric Wizard to keep you grounded amid the charnel atmos, and I’ve also dug up some old favourites from my archive of old movie samples, so… approach with open ears and a singularly weird and unsettling journey awaits (I hope).

Probably available for a limited time only, due to the near-impossibility of keeping downloadable files up for long on the increasingly locked down corporate internet, but as ever, if you miss it, just give me a shout. 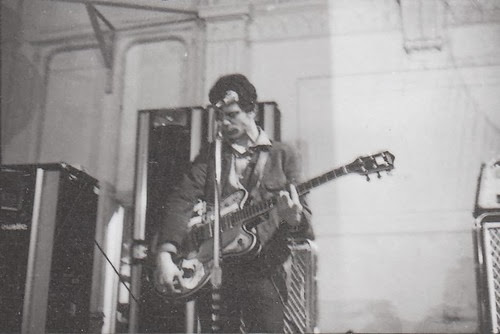 By now you’ve no doubt heard the sad news about Lou Reed.

I was actually all ready to go with my annual Halloween compilation this evening, but in honour of this, I’ll leave it a few days and post it mid-week.

Obviously it’s difficult to come up with a proper tribute to a figure as multi-faceted and divisive as Lou Reed at the drop of a hat, but during this week I’ll try to come up with some stuff to do him justice, maybe post next weekend.

Normally that would be a case of busting out an artists’ back catalogue and having a good ol’ session of remembrance, but there’s no point doing that this time, because very little time goes by when I’m not listening to, or thinking about, some aspect of The Velvet Underground’s work.

Just this morning, the original album version of ‘Waiting For The Man’ popped up on my mp3 player as I walked out to do some grocery shopping, reminding me for the first time in a while of how great and unusual the recoding and arrangement is on that track, making me wonder about the fuzzy edge on the guitar, and about how radical the relentless droniness of it still sounds, and about who was playing that one note piano bit when all sources say that track was probably a live take with no overdubs. Just under two weeks ago, I was riding back from the airport with ‘Live ‘69’ on my headphones, making me cry and then cheering me up again and making me cry in a happy way. Various times recently, I could have been found striding around the place lost in the incredible demo versions and ‘Sweet Jane’ and ‘Rock n’ Roll’, feeling right jubilant and nudging them up my “songs I’d probably like played at my funeral” list.

That’s the space of about a month. I’ve been listening to the VU since I was about eighteen. I’m not sick of hearing anything that they recorded yet. Hell, if they’d only ever recorded one song, I probably wouldn’t be sick of it yet. Some kindsa love, the possibilities are endless, and for me to miss one…. etc etc.

So there ya go.

We’ll return to all this later anyway. In the meantime, don’t let it spoil your Halloween. 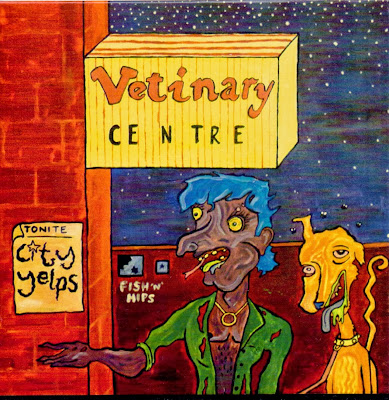 *How would you describe your music?

SA: In my head we’re like The Go Betweens. But to the crowd it sounds like, I dunno, shitty.


Before they played a note, I knew that City Yelps from Leeds were my kind of band.

How did I know? I dunno. Just a feeling. The kind of spider sense that comes from nearly fifteen years of doing this rubbish I suppose. I liked the way they seem to have shunned any kind of self-publicity or web presence, instead distributing paper-based ‘newsletters’ of in-jokes and photocopied scrawl. I liked the matter-of-fact semi-nervousness with which they plugged themselves in on-stage. And when they actually got going, verily I was content that I’d picked a winner. The kind of group who presumably do not aspire to generate exultant write-ups or over-eager fans, content as they are to keep their heads down, define their own parameters and concentrate on the basic business of being good within them.

I liked the way that their only concession to doing anything other than plugging in cheap instruments and playing them was a Danelectro echo pedal connected up to guitarist/singer Shaun’s microphone. This appeared to be quite a daring new addition to their chosen aesthetic, and indeed he got a bit miffed when the batteries ran out halfway through the set, disconnecting it with some muttering about what a bloody waste of time that was, etc.

Thus far, I seem to have defined my liking for City Yelps in terms of what they are not and what they do not do, but I really don’t think that should be taken as a negative stance. Presumably steadfast devotees of the spirit of Swell Maps, early Fall and 4-track era Flying Nun (but not in such a way that anyone would waste time shouting about it in a press release of course), City Yelps sound like, when all the bullshit started happened to the music they liked (cf: industry, ‘influence’, hype, PR and hassle), they simply went away and locked the doors. Good for them. By refusing to participate in what repels us, we all grow stronger.

The gig I referred to above took place ages ago (April? May?), so perhaps my memory isn’t all that, but I remember the band saying something vaguely self-deprecating on stage about the their attempt to make ‘poverty stricken psychedelia’, and that is indeed what they head for on the title track of this brief CD EP – straight-to-practice-amp trebly guitar tone, water-treading rhythm section and mumbled, low register vox rumbling around to create five minutes of the kind of eerie immersion that all those boys with their silver cases full of boutique gear currently trading under increasingly abused ‘psyche’ banner would have trouble matching. I couldn’t really tell you quite why I like it, but I do. (A few little bits of dissonant piano floundering thrown into the mix work very well – none-more-Swell Maps, natch.)

The two other tracks here – ‘Lawns’ and ‘Citizen Yelps’ - are much shorter, and stick to a faster, more ostensibly punk approach whose wrecked/miffed tone pleases me greatly, putting me in mind of both of The Real Numbers, and of that great Crawling Age CD-R from (christ, was it really) a few years back. (No surprise perhaps, given that the aforementioned Shaun was one of the individuals responsible for the latter, and I’m pretty sure I saw him drumming for the former when they played in London.)

Though these songs have nice, loud, serviceable recordings, those who wish things to sound normal will initially be perturbed by the near-invisibility of the vocals, which hover at the bottom of the mix sounding more like slurred background commentary than a primary element in proceedings. Now, I for one generally favour low, semi-comprehensible singing these days, but even I was a bit like, “seriously fellas, what happened to the vocals?” on first listen. Pretty quickly though, I began to dig it, and furthermore realised that, despite Mr. Shaun’s apparent reticence as a vocalist, I can still actually hear most of what he’s going on about quite clearly. And what he is going on about sounds kind of interesting too. Like a listener to any good weirdo punk song, I am confused, and intrigued.

I realise that thus far this must all sound like yr standard sort of 21st century low-effort, lo-fi business, but I would nonetheless contend that this EP, despite (or perhaps even because of) the casual-listener-harvesting challenges it provides, is extremely good, nay timeless, stuff. Rather than using a lo-fi aesthetic to mask sloppiness and self-indulgence, City Yelps sound like a very dedicated band masquerading as a “we couldn’t give a monkeys, we’re just having a laugh” band (always a welcome combination), trying very hard to produce good music in a context that they feel is honest, comfortable and cheap. And they succeed very well, if I’m any judge. The guitar playing is excellent, the melodies and lyrics are unconventional and somewhat interesting, the bass and drums bang away with an appropriately off-kilter groove (as opposed to the increasingly popular option of ‘entirely lacking a groove’), and the ‘feel’ is right there.

When I bought this CD from Trev back in April or May or whenever, he told me that I’d bagged one of the last independently circulating copies, so I dunno if you stand much chance of finding a physical copy anymore. I think you might still be able to get one if you subscribe to the current Oddbox singles club (EP club?) thingy (try your luck!) or failing that I suppose you could go to Leeds and bother the band until they burn you a copy or something.

Little additional City Yelps info is forthcoming on this confangled ‘internet’, but here are some scans of their newsletters to aid the curious. 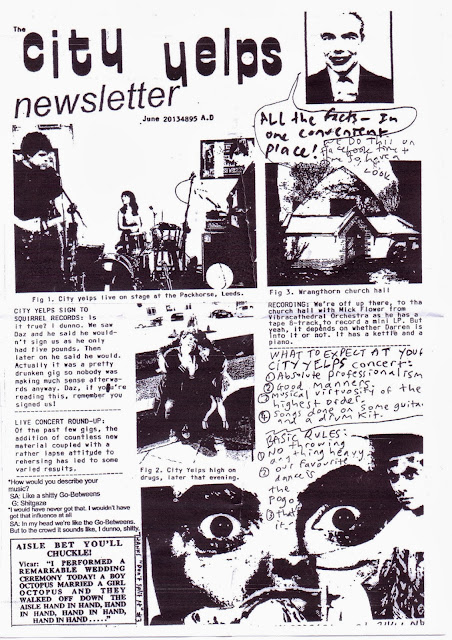 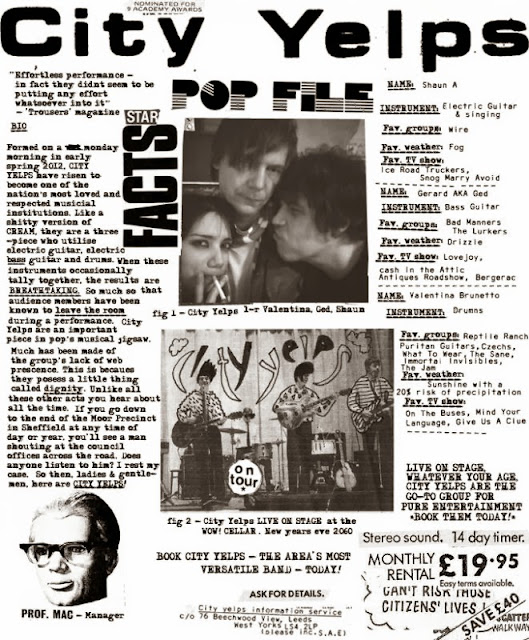