FINALLY. You’ll forgive me my inadvertent summer holiday. More hiatus to come I’m afraid, but let’s throw this out there before it gets silly.
Be advised: following post contains drunkenness. 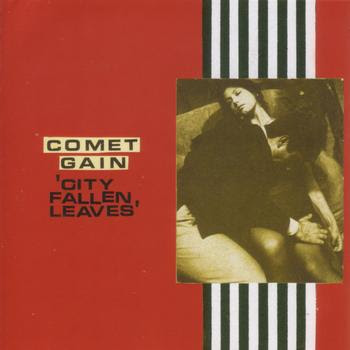 Comet Gain’s follow-up to ‘Realistes’, ‘City Fallen Leaves’, came out in late ‘05/early ’06 I think, and I’d already listened to it to the point of oblivion before I moved to London in late 2006. But inevitably perhaps, it’s a record I most strongly associate with my first year or two in the capital, so let’s skip over initial impressions and all that (thank christ) and pick things up there.

On one level, ‘City..’ is an album full of immediate hit songs, with far brighter, louder production than any previous CG release. Look: they even went to Brighton and made a VIDEO for opening track ‘Fists in my Pocket’, and whilst they’re down a member down and looking a bit hungover, it’s a surprisingly straightforward ‘look, we’re an indie band, this is our video for our song’ kinda proposition.

Pretty good song, huh? Another one of those aforementioned ‘Amazing Hit Songs’. Fuck me, just listen to the way David and Rachel spit the consonants on “..pocket”.

At the same time though, ‘City Fallen Leaves’ also functions as a big, spiked bundle of failure and disappointment, and desperate attempts to deal with such, framed within the soul-grinding context of life in London after the hope one initially invests in the city’s thin promise of bohemian riches has long since curled up in the corner and died.

It’s also a record being bled dry by nostalgia – full of songs aching for friends and scenes long departed, replaced by… what? Crying over old mixtapes and all that shit.

A few years after the forward-marching statement of intent that was ‘Realistes’, it seems the battle hasn’t gone too well.

Although it could be easily misconstrued as some kind of ‘tribute’ to London, ‘..Fallen Leaves’ sounds frankly like the work of a man who’s fucking sick to death of it. As a newcomer to the big, ugly, unwelcoming city myself, wondering why I’d go to such trouble just to call an insufferable place like this ‘home’, I fell back endlessly on the double-header of ‘Daydream Scars’ and ‘Bored Roar’. Simple and loud – perfect punk rock songs - full of futility and utter fury; cursed frustrations of banging your head against this deadening banality between every bus stop, drawing an arc between park bench haunting maniacs and dead eyed clowns in leather jackets, paying £4.50 a pint to stand in the rain cos there’s no space inside, reassuring each other that this is where it’s all going down.

“So bored, with static you will never change/
Bored with how are you and let’s do this again”

Through dozens of dark, pissed off journeys back through early morning South London, these tunes were where it was all going down - still would be probably, if I still bothered hauling myself off every weekend, in search of something I couldn’t quite name but inevitably fail to find. Where was I coming back from? I don’t even remember. Wherever it was, it can’t have been much fun. At least now, unlike the narrator of some of the ‘City Fallen Leaves’ songs, I’ve come to an understanding with the city – experienced enough in how to live here that I know the people, the places, the memories, the journeys that I’m comfortable with, and I can usually stick with them without yearning for something more; secure in the knowledge that every time I go central I’ll wonder why I fucking bothered; aware that I’d probably be happier drifting down the Thames in a barrel than scamming ‘round Soho after midnight trying to get a bus. So it was and so it ever shall be – hating stuff and avoiding places in what this city’s all about, as befits the capital of a nation as belligerent and neurotic as our own.

Then again though, I’m an optimist. So before I lose the thread and get all Peter Ackroyd on your ass, let me admit that I found myself in exactly the situation described in the preceding paragraph this very evening. And this time ‘round, it was fine. ‘City Fallen Leaves’ all the way back was sounding good. It’s an album I can very rarely listen to sober in the daytime these days, just because it’s all a bit too… y’know. If you don’t get what I’m going on about with this band though, here’s a tip: head out to Soho, drink about six hours worth of whatever slop’s going, scour the streets for more, catch the 436 to Deptford Bridge at 2am and put them on yr headphones. (Mr . Feck is very much is very much a North London partisan I realise, but some difference, y’know.)

It was this aspect of Comet Gain’s appeal that first inspired me to draw a comparison with that other great band who only ever truly make sense on drunken forced marches and Night Buses – The Mekons. Not the most obvious reference point perhaps, but compare & contrast in terms of ideals, attitude, musical execution, personalities, membership policy, rabid cult fanbase and general public ignorance etc, and I think you’ll find it’s all there. Felt like a fairly odd line to draw when I first threw it out there in a review a couple of years back, but I’ve seen it popping up in a couple of other places subsequently, which is nice - hopefully proves I’m not entirely off the mark. Plus: Comet Gain don’t wear stupid hats or utilise accordions (not yet anyway), thus making their music far more palatable whilst in mixed company, but retaining the same disgraceful power and wild abandon. Result.

But look: I really can’t do the full bit on ‘City Fallen Leaves’ right now. I’ve get too much silly shit tied up with it, it’s all too… y’know. I’d rather talk about surf music, or metal, or something. Can we have that conversation instead? Do you know ‘Thunder Reef’ by the Bobby Fuller four? What a tune. Have you heard that mp3 that was doing the rounds of all the between song banter from a Venom concert edited together? Hilarious. Let’s go from there.

I mean, what the fuck am I supposed to say about ‘Ballad of a Mixtape’ by this stage, for fuck’s sake…? I couldn’t even begin. It’s ridiculous. It must be like being some wounded veteran of the American War of Independence, hearing the ‘Star Spangled Banner’ for the first time. I mean, gimme a break.

“Unwilling to bend our knees, but willing to burst into flame
In Washington State, or in New Cross Gate”

(Gotta love the local reference though.)

Anyone who is in any way involved with the kind of stuff I write about on this blog, just listen, and we’ll all salute at funerals in the rain together, alright?

Here’s the accompanying panel from the CD booklet, that I scanned (at work when nobody was looking) and posted back in May 2006. Click to enlarge and let it tell the story cos I’m not going to. 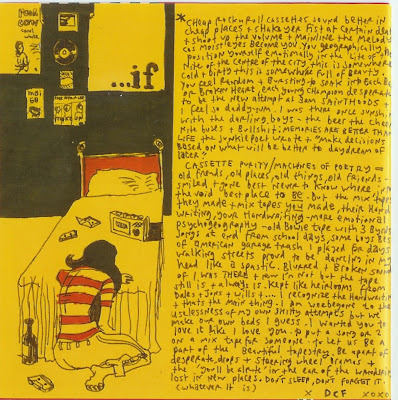 Back with our next thrilling instalment before you know it. Before I get back to the Comet Gaining (it’s coming), it occurred to that I haven’t posted a volume of my ongoing psychedelic mix CD project thing for quite a while, so here we go.

No particular theme to this one, but it’s a track-list that I’ve been kicking around for a while and I really like it.

So schedule an eighty minute walk in the woods, hit this up on the headphones, and I believe you’ll have a fine time.

Oh, and whilst I’m at it, here some new links I put up recently to the previous volumes;