Ever since I started weblog writing all those years on, I’ve felt a kind of responsibility to mark the passing of musicians and sundry other creative types whose work has had an impact on me. These things always flit in and out of showbiz news feeds far too quickly for my liking (when they make it into them at all), so it behoves me to at least pay tribute before my own tiny audience.

Increasingly though, they are periods when they come in such a flurry it’s impossible to keep up… in addition to Dick Dale (see below), the past couple of weeks have seen the loss of Hal Blaine, who basically played drums on everything (seriously, I used to joke about instigating a drinking game based on how long you could spend reading allmusic.com or a mags like ‘Mojo’ before his name came up), Yuyu Uchida of Flower Travellin’ Band (also a fine actor and a wonderful, eccentric figure within Japanese pop culture across the decades), garage-punk affiliated r’n’b belter Andre Williams (think of him as, like, the ODB of the retro soul circuit), and now, suddenly staggering from a double heavy blow on this sunny Monday morning.

On the movies side of things, looks like we’ve been forced to say goodbye to Larry Cohen (one of my favourite directors, and one of the wildest and most gifted figures ever to labour in the trenches of commercial genre cinema), and on the music side... the last few minutes of the Today Programme as I finish by breakfast and run out the door (late as usual) brings the news that Scott Walker is no longer with us. (Nuff said.)

Though I’ve always loved his music (who else in the pop music realm can heft such a mad combination of awe, absurdity, fear, melancholy and simple, rockin’ pleasure?), I am not in a place right now where I feel like I could bang out a proper Scott Walker obit, and I can’t really bring myself to just fudge it with a few bits of career recap and personal anecdotes. So, I dunno… watch this space, I suppose. Maybe I never will feel I can write one. I mean, I’ve probably spent over fifteen years intermittently wondering how in god’s name one can properly respond to something like ‘Scott 4’ (never mind his later work), so I’m unlikely to figure out the answer in the next few hours. I know it’s a cop-out, but it just speaks for itself really, doesn’t it?

(Ok, one random anecdote before we move on: many years ago, back when all the critics were going ga-ga over ‘The Drift’, I had a dream in which I attended a secret Scott Walker concert, which took place in a small, classically decorated university seminar room, lined with book shelves and suchlike. Various musical figures and writer/critic types were present, and Walker sat at the piano with his face hidden by some kind of African tribal mask. He began to play and sing in a grating, formless, out of tune sort of fashion that (somewhat surprisingly, given his avant garde rep) offended the audience so much that they began heckling and trying to disrupt him. In response, he physically picked up the piano, and threw it, Incredible Hulk style, at the wall, where it destroyed a bookcase. The audience tried to flee, but found that the doors to the room were locked, whilst Scott meanwhile charged into the crowd and began violently attacking people. That’s all I recall. Perhaps there’s a dodgy ‘career overview’ level metaphor buried in there somewhere – thanks, my 2006 sub-conscious! - but I’m not desperate enough to need to go that route right now.)

The faster these deaths being to pile up, the emptier sections of my music & film collections become of still-living souls, the more I’m drawn to muse upon the horrible, banal inevitability of mortality and generational shifts.

It’s no secret, I suppose, that my cultural tastes remain rooted – presumably forever – in the ‘60s and ‘70s. I do my best to plug into contemporary stuff from time to time (still got a toehold at least in rock/noise music and ‘cult’ movies), but I always feel a bit of an outsider in the present, and it’s the time before my birth that I inevitably head back to for comfort. And, like the proverbial college lecturers perpetually grousing that their students don’t know who Humphrey Bogart is, it saddens me terribly to see this era, which still felt just-round-the-corner whilst I was growing up, fading inevitably into the mist of the historical past.

There’s nothing to be done about it – it’s simple maths, and the brutality of the ticking clock. The late ‘60s were now over 50 years ago, and most people who were doing stuff then would at least have been in their early ‘20s. Most people, basically, die in their ‘70s. Twenty plus fifty, equals. We are entering the phase in which that era – which still feels so alive, so relevant to me every time I put my headphones on or watch a movie – is beginning to disappear from living memory, just like the Second World War and the First World War have before it. Before too long, if we want to know something about the 1960s, we won’t be turning to the active participants anymore, we’ll be going straight to the history books and the newspaper archive.

To me at least, this realisation just hurts too fucking much. I’ll name no names, but there are certain people whom I’ve never met face to face (well, I have met one of them actually, but that’s another story) whose continued good health I cross my fingers and pray for almost every day – yet I know I’ll be here, trying to write about them, sooner or later.

That’s life, of course (particularly when you choose to live in the past), but it still stinks. And always, generational time ploughs on. People who were the-age-I-am-now when I first got into music are now just a few years away from being officially elderly. How long ‘til I’m writing about them? If time’s supposed to be relative, can’t it give us a break now and again? I mean, we’ve already got the punk obits coming almost as thick n’ fast as the hippie ones, as we hit the thin end of that generation’s mortality scatter graph.

I don’t know where I’m going with this, or how to segue it back into something that’s not utterly bleedin’ obvious, so here you go – it is what it is.

I could end flippantly and say, well, I bet The Rolling Stones will still be touring, and I still won’t bother going to see them – but a few years ago we could have said the same about AC/DC, or Motorhead. As we get older, new rituals and certainties become harder to identify and hang on to, as the old ones vanish. Or something. I don’t know. 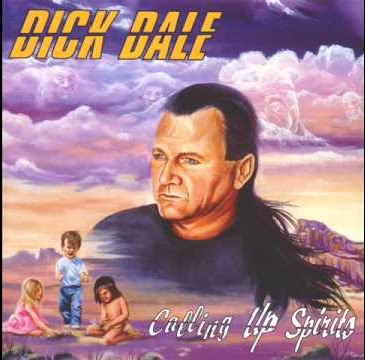 “Listen to The King of the Surf Guitar,

Listen to The King of the Surf Guitar,

Listen, listen, to The King”

As witnessed by this classic recording, it is fair to say that Dick Dale was not without an ego. But, like the caricature of an all-American astronaut or pioneering surgeon, his energies were pushed so completely in the direction of positivity, productivity and general human dynamism that it really didn’t matter.

Harder, faster and more physically demanding than anything that preceded it in the popular realm in the early ‘60s (and pretty much retaining that distinction on his ‘roided up 90s comeback albums [see the awesome artwork for 1996’s ‘Calling Up Spirits’, reproduced above], the overdriven, bass-heavy, double-picking guitar style he made his trademark was wholly original, and remains instantly exhilarating to this day, whether it comes via the man himself or any of his countless successors in the field. To state the bleedin’ obvious, he is up there with Hendrix, Iommi and Chuck Berry in terms of his full spectrum influence upon the sound of electric guitar as we know it today.

Like those kids in “poor L.A.”, I was lucky enough to see Dick Dale play, about as far from the pacific surf as it’s possible to get, at the Luminaire in Kilburn in, I think, 2010 (I remember it was the night before I moved house). It was totally awesome, anyway. As was often the case, his backing band comprised former members of So-Cal punk legends Agent Orange, but it was definitely Dick who was large and in charge, like some Strat-wielding Colonel Kilgore, seemingly pushing his younger band-mates to play harder, faster, for longer. Plugged into a full stack in the small room, he was helicopter gunship loud, as we might reasonably have hoped.

I recall it being one of those shows where the headlining act are having such a great time that they just keep playing and playing, way beyond their allotted set time, seemingly oblivious to the audience thinning out as people duck out to get their last train home or relieve the babysitter. He played some numbers on the trumpet (just in case we didn’t believe he was a PROPER musician, he made clear), he sang ‘Peppermint Man’ at the piano, and delivered numerous thinly-veiled tributes to his own greatness.

No disagreements from this quarter. Slapping down the long term health problems that eventually got the better of him and touring the world kicking several hours-worth of ass on a nightly basis into his seventh decade, he gave every impression of being unstoppable back in 2010, endlessly roaring on like one of the super-charged vehicles his music so frequently evokes, and he could celebrate himself as much as he liked so far as I was concerned. Learning today that the engine has finally spluttered to a halt brings me great sadness. R.I.P. 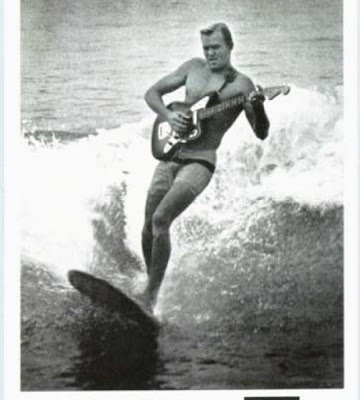