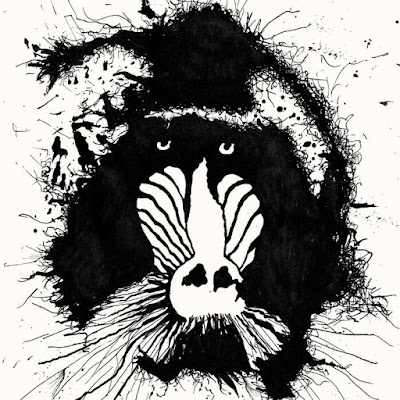 Just a few months back, I was griping about Comets On Fire/Howlin’ Rain guitar-lord Ethan Miller being relegated to bass in the wonderful Heron Oblivion, and lo and behold, my prayers are answered and then some, as he’s back to knock our fucking faces off with his most ferocious band to date.

Oh, but how shall I sing of my love for Feral Ohm’s self-titled debut 12”, as recently released on Miller’s own Silver Current label?

Well, let’s put it this way – you know how the music scene in any given city at any given time is liable to include at least one band who use too many capital letters and exclamations marks whilst claiming to play “TRUE, BALLS-TO-THE-WALL HIGH ENERGY ROCK N’ROLL!!!” or suchlike? And you know how (unless they are Guitar Wolf), those bands will inevitably kind of suck?

Well, Feral Ohms make no such claims (as far as I know), but they succeed in sounding like those bands must sound in the heads of their members, if you get my drift. Which is to say, they sound a bit like The MC5 in full throttle ‘Kick Out The Jams’ mode, bulked up on steroids and 21st century pedal board excess, comin’ at you like a hurricane.

When I initially listened to a bit of the band’s live album (which appeared before this studio effort, awkwardly), I was a little concerned to hear a guitarist as gifted as Miller largely relegated to playing chords in a by-the-book garage-punk power trio, but, thanks to the miracle of multi-track recording, he’s firing on all cylinders here, his trademark lava-spurting, orgasmic volcano freakout approach to the six string molesting almost every second of this splendid record with sweetly hysterical wang bar/fuzz-wah chaos.

Basically, this band just do everything right. ‘Living Junkyard’! ‘Gods of Nicaragua’! These are the kind of things rock n’ roll songs should be called! Admittedly, ‘Teenage God Born To Die’ sounds a bit try-hard, but when you hear the track itself….. you’ll buy it.

My god, I love this record. It plays at 45, clocks in at about twenty five minutes split between nine songs, and the whole thing is just an absolute rampage. It’s sad to think that in this day and age there is probably a limited audience for stuff that sounds like Rob Tyner and Kawabata Makoto guesting on a Supersuckers record, but if you are a part of that audience, I’d advise you to try to keep Feral Ohms off your headphones when passing a tattoo shop, lest you must go through the remainder of your life with a big baboon face inked on your anatomy. Remember: rock music this exuberantly rocking must be treated with care, or blood may go to the head, and decision-making may suffer.

I’d close with a snarky note about how this record eats Ty Seagull’s oeuvre for breakfast and feeds the bones to Buck Dharma’s ravenous huskies, but that would just be petty, wouldn’t it…?

In conclusion: please just get this, it rules.

This 12” can be streamed & purchased digitally via bandcamp, and the vinyl (supplied w/ download code) has gained distribution across the US, UK and probably elsewhere, so seek and ye shall find.