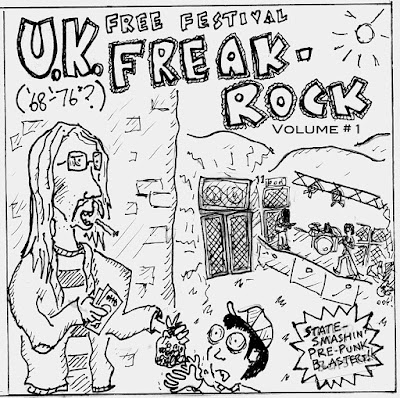 I’ve been palming variations on this comp CD off on people for several years now, and I think the track list is now in it’s third, possibly fourth, iteration – so it’s about time I stuck it up on the weblog.

The initial impetus behind it was to provide something of a sampler for folks who dug Black Sabbath and Led Zep but hadn’t yet moved on to check out the wider field of mutant, riff-blasting heavy rock music that existed alongside them in the ‘70s British underground.

As I dug deeper into the period myself however, and kept discovering more great records and great stories, the track list began to take on a slightly more ambitious aim – namely, that of demonstrating the solid through-line of anti-authoritarian rage, musical thuggery and hair-raising electrified noise that ran straight from the psychedelia and counter-culture aligned free festival rock of the late ‘60s to the explosion of punk and heavy metal at the end of the ‘70s, and of countering the offensively reductive “hippies > prog > punk” timeline that various divvies continue to trot out every time the BBC makes a documentary.

1. Admittedly, some may wonder where exactly Badfinger fit into all this, but I would urge them to sample their track here before scoffing, because it is certifiably bad-ass.

2. Likewise, some may feel some of my choices here are a tad obvious – particularly in light of the many ‘70s Heavy compilations that have appeared in recent years - but I would ask readers to reflect on the fact that there are still many listeners out there for whom such hallowed names as Stackwaddy, Edgar Broughton Band, Third World War etc mean nothing. Imagine their pupils dilating as this oversight is corrected, and I’m sure you grizzled vets can stand to sit through ‘Maypole’ one more time.

3. Others still may question the total lack of female representation on this comp, and, whilst I realise that “it was the ‘70s, 98% of music was made by hairy-chested, ale-swilling brutes with facial hair like Genghis Khan” doesn’t constitute much of an excuse, I’ll simply say that, if you know of any good female-led British heavy rock bands from the 1970s, please tell me, because I’d love to listen to them.

4. Do you think there’s too much Hawkwind? It did cross my mind, but… if you can conceive of the concept of “too much Hawkwind”, you are probably not the target audience for this comp.

So -- case closed. I love every bit of this track list beyond words, and I’m gonna stick with it. Meanwhile, I’ve got Volume # 2 on the go, and if anything, I like it even better than this one, so if you get a kick out of Vol # 1 and/or want to complain that I’ve missed out your favourites, stick around.


Full track-list with timecodes as follows: 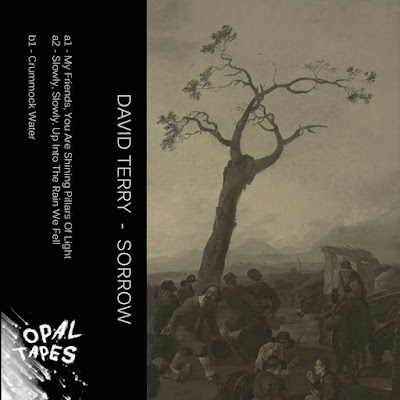 So I finally did it folks – I bought a cassette tape. Via mail order, for £8.50 including postage. I don’t even have a decent tape player at the time of writing, but such was my desire to hear David Terry’s ‘Sorrow’ through the big speakers after streaming it online, I had to go the physical option, perhaps finally prompting me to start scouring local ‘Collection Only’ ebay listing in search of a double tape deck. (THINKS OUT LOUD: Then I could finally listen to those Indian classical tapes I rescued from a bin too…)

Anyway - with that out of way, banish the preceding paragraph from your brain, for such nattering crap is, it’s safe to say, complete anathema to the atmosphere of earthless, transcendental Romanticism David Terry seeks to evoke herein.

If you’ve been reading these pages for a while, you’ll be aware of Terry’s work providing bass and ‘incantations’ for Bong, and you’ll be aware that I speak as someone with a deep love for everything that band have ever achieved when I dare to suggest that some of Terry’s contributions in the latter capacity have occasionally bordered on the brink of the ridiculous, thus making me at least *slightly* wary when approaching material he’s knocked up on his own, without any bandmates to rein him in.

Well, I needn’t have worried. On ‘Sorrow’, Terry throws the net of his ambition wide, and… I dunno, comes back with all the fucking fish I suppose, if you’ll excuse the iffy metaphor. Whether taken as a work of modern composition, of “dungeon drone” (quoth the bandcamp page), or merely as long form gothic melancholia, this is a very impressive achievement, and makes for heady, immersive listening, even across a near ninety minute run time.

Whilst Terry retains the meditative / hypnotic feel of Bong herein, any trace of metal/doom ancestry is long gone. Instead, other comparisons abound. Admittedly, ‘.My Friends, You Are Shining Pillars Of Light’ sounds very much of a piece with ‘Find Your Own Gods’ from Bong’s most recent LP (or, failing that, sort of like Terry Riley communing with the spirit of Blake on some sun-dappled English hillside, if you must), but ‘Slowly, Slowly, Up Into The Rain We Fell’ sounds equally like The Necks attempting to ‘jam’ with a Gregorian choral ensemble, whilst the legitimately epic ambience of ‘Crummock Water’ might be said to resemble Brian Eno’s hypothetical “Music for Cliff-top Church Yards”, whilst also recalling the sombre-yet-calming tones of Leyland Kirby, or Rameses III’s ‘I Could Not Love You More’.

But, such one-sheet guff is both unnecessary and inane. In truth, I’m aware of nothing in the current micro-label/sub-rock underground that shares the compositional scope and clarity of vision Terry displays here.

Conjured up primarily from voice, keys, Fursaxa-esque accordion drones and a touch of distant, thumping percussion to keep time, there is a carefully wrought sense of slow mo melodicism to these pieces that set them apart from the vast majority of Terry’s lonesome tape droning contemporaries. The layers he builds come together with a more deliberate intent than the kind of accidental / circumstantial methodology that often governs such things, sometimes sounding like the moment of sublime tonal union when everything comes together in some grand classical piece, stretched out and extended across a 20+ minute duration. It’s pretty great.

Wisely perhaps in this more subdued context, Terry’s use of his voice here avoids the somewhat theatrical bent of his thunderous interventions on Bong records, instead employing a ‘voice as instrument’ approach that sees his beautifully resonant bass tones drifting mantra like through the fog of ‘My Friends..’, repeating variations on the title sentence to ultimately moving effect.

Emotionally-speaking, ‘Sorrow’ belies the expectations of its title and cover art by neatly side-stepping the over-bearing affectations of woe and world-denying misanthropy that ensnare so many metal bands, instead evoking a more honest, more hopeful field of melancholic drift, suggestive of a deep immersion both in the contemplation of nature, and in the gleaming spires of the distinctly old school, capital ‘R’ Romanticism that often goes with it.

Far from the blackened deep space explorations of Bong’s earlier career, the feel Terry conveys here recalls the band’s inspired use of Turner’s ‘Thompson’s Aeolian Harp’ on the cover of their We Are, We Were and We Will Have Been LP from 2015, and – for me at least – it is a very good feel to find oneself on the receiving end of.

I know that format isn’t everything, but I also know that, each time I enter a new release record shop for the remainder of this year and see the racks stocked with the shiny new efforts of fly-by-night trending indie bands, their ugly, photo-they-pulled-off-instagram cover art lovingly rendered in eye-damaging HD colour, ready to sit like a badge of pride by the skirting-board for a few weeks whilst their new owner streams their efforts on Spotify – then verily I will weep for my inability to listen to David Terry’s ‘Sorrow’ via the suitably luxurious double LP onto which this incredible music richly deserves to be pressed.

You can have one too if you visit Opal Tapes here.