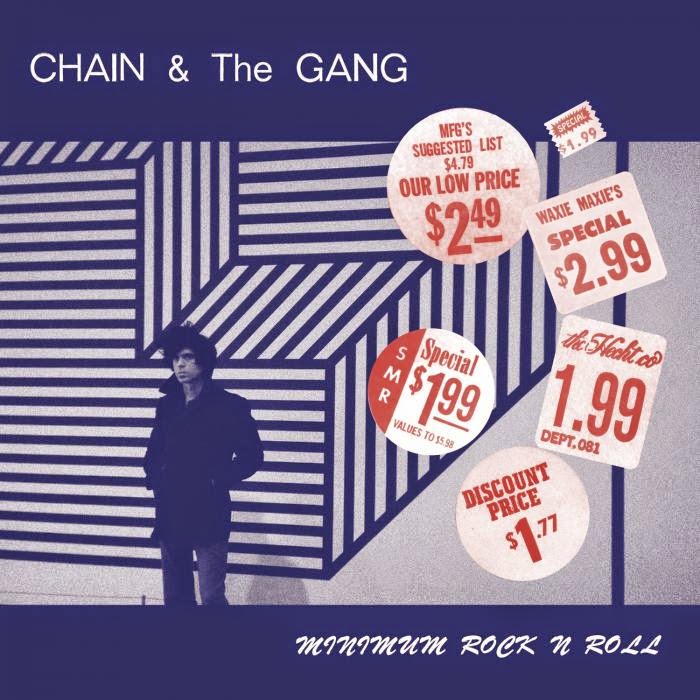 “With CHAIN & The GANG there are no excursions, no diversions… no trip to the moon, no jaunt to inner space… nothing original, no new system to integrate… just SIMPLE facts & BASIC math. Fewer WORDS, fewer BEATS, fewer NOTES… you’re tired of hearing them, we’re tired of making them…”

Bravely defying the long-standing convention that sees rock n’ roll groups beginning their LPs with a call toward energy and motion (y’know,‘Get Up’, ‘Raw Power’, something like that), Chain & The Gang instead open their latest vinyl missive by declaring their intent to ‘Devitalize’ - exhorting their listeners to shut up shop, to “just go home”, and, most scandalously for the dyed-in-the-wool rock n’ roller, to “keep it down”.

In an era in which we are urged by our suppliers of electronic equipment and accompanying media content to ‘think positive’, to ‘move forward’, whilst the geopolitical landscape around us slides ever-further into the dark ages, Chain & The Gang offer a welcome reaffirmation of negativity in rock n’ roll.

They are, as Ian Svenonious was keen to remind us during a recent performance at London’s Tufnell Park Dome, the only group of their kind. Beginning their career in 2010 with a cry of “down with liberty… up with chains!”, they are the only group who seek to impose a limit upon self-expression, who acknowledge that “originality is the enemy”. They are the only group (in the entire history of Western popular music, more likely than not) who proudly declare themselves to be pro-censorship. They recognise, no doubt, that censorship is always with us – no more opposable than gravity - and that the real question is: who censors who? Only by engaging, instead of blithely disowning, can we stand a chance of moving from the second ‘who’ to the first.

As Ian S. might well cop, the key to writing an effective political pop song is to appear extremely specific in your demands, whilst remaining extremely vague. The Chris Hillman/Gram Parsons-composed country-rock standard ‘Sin City’ (as performed by both The Flying Burrito Brothers and The Mekons within my own record collection) provides a good example. A spirited diatribe on the subject of civic corruption within an unnamed town that may or may not be intended as a microcosm of wider society, the song purports to communicate a great deal of information, praising some participants in the struggle, whilst condemning others to a storm of divine vengeance.

In spite of such apparently clear sentiments though, further analysis of the lyrics reveal the songwriters’ message to be ambiguous in the extreme. Depending on each listener’s personal understanding of such nebulous concepts as ‘sin’ and ‘clean[ing] up this town’, the song could be taken to represent either an extreme left wing or extreme right wing viewpoint, or alternatively could be adopted as an anthem for just about any single-issue pressure group you’d care to name.

The way the song succeeds however is by distracting our attention from this chronic lack of specificity simply by offering a composition so compelling and apparently heart-felt that it is nigh-on impossible for us not to get swept up in its ‘message’, and thus map its generalities over our own specific concerns. In fact, when performed well, the song generates such a weight of righteous indignation that even a listener wholly lacking in political conviction will find him or herself forced to affect an opinion for the duration of the song, thus to temporarily share in the emotions the performers are conveying. Like a successful politician, the song sells the idea of an outsider’s struggle for fairness and decency against a greedy, autocratic enemy so well that the actual details of the speaker’s platform become irrelevant.

Chain & The Gang do not perform ‘Sin City’, either on this record, or anywhere else to my knowledge. I’m sure they realise perfectly well that such material would not become them. Discussing the song at length as part of an assessment of their work is an unwarranted digression on my part, for which I apologise.

Nonetheless though, I feel that the lessons we can learn from examining the song provide a pertinent demonstration of the machinations common to socio-political songwriting - the same machinations that Chain & The Gang seek both to exploit and to deconstruct, allowing us to enjoy them whilst also exposing their workings to plain view.

Masterpieces of opaqueness, the songs performed by Chain & The Gang, particularly those found on ‘Minimum Rock n’ Roll’, are built from apparently innocent snatches of associative wordplay and playful mutations of common phraseology. ‘Mum’s The Word’, they sing. ‘Crime Don’t Pay’. ‘Got To Have It Every Day’. By further investigating the logic of these apparently banal pronouncements though, the group seek to create a base-level dialogue on the language of confinement and freedom, need and surplus, free will and determinism, power and lack thereof, that will (one hopes) prove applicable to most potential situations.

Just as Chain & The Gang strive to offer a convincing vision of implacable ‘cool’ (both musical & sartorial) that transcends temporal and geographical boundaries, so their songs aim at addressing questions common to all systems and power structures. “I got to have it every day”, Svenonious chants during the song of that name. “I don’t care how I get it / I could get it from a tree / I could get it from a stone / it doesn’t matter at all to me”. But WHAT must he get, the inquiring mind will demand to know, even as the poised musical delivery soothes and reassures. What ‘IT’ are we talking about here? Well, that’s for us to decide. What do YOU need every day? And how do you get it? Chain & The Gang, their dedication to aesthetic minimalism firmly in place, are not going to provide any pointers.

“What are you in here for?”, Ian asks his hypothetical fellow inmates in the song of that name. And, more pointedly, “why are THEY out THERE?” He is “in here”, he conjectures, for “loving too much”, for his “tender touch” . They are “out there” because “their blood runs cold”, because they “do what they’re told”. Upon what scale is the metaphorical construct here supposed to operate? The musical ‘underground’, as opposed to the ‘mainstream’? The poor and powerless of society, as opposed to the enabled rich? The existential ‘outsider’, as opposed to the socially integrated ‘insider’? An actual imagined correctional facility? It really doesn’t matter. Wherever there is an ‘inside’ and an ‘outside’ to contemplate, an ‘us’ and a ‘them’, the song is of use.

By leaving their statements so open to interpretation, wisely stripped of the didactic and retrospectively embarrassing specificity that so often limits the geographic & temporal worth of artistic expressions of discontent, Chain & The Gang are doing a great service to all of us who feel, or may in the future feel, disaffected from our society – maximizing the potential usefulness of their songs, whilst still appearing clear in their declaration of intent.

After experiencing a Chain & The Gang record or concert, the listener is apt to feel certain that the group is driven by strong guiding principles. S/he may even feel an immediate kinship with the gospel they are espousing. But, if questioned, the exact nature of their project remains elusive.

Like all successful producers of ideologically-inclined music, the group are manipulative. Like the writers of ‘Sin City’, they initially make us FEEL their argument, not consider it. BUT, there is a crucial difference at work here. As befits a combo led by a champion of “the responsible use of rock n’ roll”, Chain & The Gang’s manipulations are both transparent and benign. Beyond the ‘feel’ with which they hook us, we find not ill-advised generalities, but questions and challenges. By raising these questions whilst refusing to make so much as a scribble in the ‘answers’ column, the group encourages us to think for ourselves, to adapt the methodology of our own approach to life to the oppositional framework they provide. As quoted above, “SIMPLE facts and BASIC math” are the only building blocks they require.

Unlike many socially engaged musicians, Chain & The Gang are also generous when it comes to ensuring that their records and performances remain wholly entertaining, whether one wants to engage with their wider programme or not. Fervent refuseniks, or those who merely seek a good time - both are welcome, and both will leave satisfied.

In this regard, ‘Minimum Rock n Roll’ is arguably their strongest platter to date, the group’s new credo of minimalism allowing them to deliver tightly-wound, ecumenical doses of rock & funk elements, carefully selected to wring maximum effect from the barest of ingredients (that of course being the central aim of all progressively minded rock n’ roll, when you get down to it) – a perfect expression of Ian’s back cover manifesto.

Gently malevolent, the group’s self-defined “crime-rock” is menacing in much the same way that ‘50s Juvenile Delinquent literature or ‘60s ‘roughie’ sex dramas are menacing – a brew that consciously evokes the cynical yet romantic legends of outlaws and urban deviance in 20th century America, fashioned, of course, as a reflection of the alienation and confinement that the group feels in the 21st century.

Garage-punk churn, flick-knife funk rhythms, cyclical Link Wray/James Burton guitar figures and girl group call & response chants: all of these elements evoke a spirit wholly distinct from the Official Culture of the United States, and from those outside of that culture (beat poets, hippie artisans, indoor hat-wearers, indie bands) who would seek, consciously or otherwise, to be included within its comforting embrace. However much of a calculated fantasy it may be for the group’s membership, Chain & The Gang’s music presents a wholly working class conception of historical outsiderdom: noble, self-defined, growing from the bottom up and fighting its way to the top. Simplistic maybe, but EFFECTIVE. “Crime don’t pay,” they acknowledge, “but how can I live my life this way?” As ever, the question is left open. It will be your own answer that provides the next step.

Listen and buy digitally from Chain & The Gang on bandcamp, or get the vinyl from Fortuna Pop!.