Hey, Future of the Left have some new stuff out. 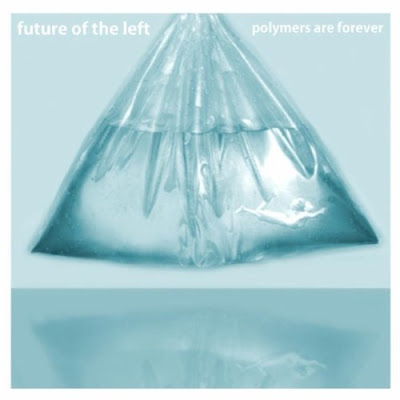 I don’t usually go in for ‘plug’ type posts, but hey – better than no posts. Just thought that fans of obtuse, hateful diatribes detailing the failures of the modern world set to the accompaniment of tormented prog-punk might benefit from knowing that Future of the Left – who made one of the most extraordinary albums of recent years with ‘Travels With Myself and Another’ – have got a new six track EP type thing out this week.

Precisely the kind of mid-level, semi-pro band-with-a-certain-following who are left in a sticky spot by the recent collapse of the music industry, and lumbered with artwork and title choices that are hardly likely to generate much enthusiasm beyond their existing fan-base (I mean look at this damn thing for chrissake, looks like some sixth form grunge band’s demo CD), I guess I just feel that Future of the Left should be pushed in people’s direction a bit more forcefully. £3.99 at Amazon, you bastards. There, that was pretty forceful.

On first listen, ‘Polymers are Forever’ sounds like it might comprise various outings considered a bit too odd to fit in on past and future LPs – heavy on both the elaborate multi-part song dynamics and semi-spoken word storytelling, which pleases me no end. About four or five callous chuckles achieved during a half-attentive first spin. If you liked ‘Arming Eritrea’ and ‘Lapsed Catholics’ off the album, you’ll appreciate this lot. Or if you’ve got no idea what I’m going on about, why not just take me on trust. I mean, don’t you want to listen to angry Welshmen performing experimental rock songs entitled ‘My Wife is Unhappy’ and ‘Dry Hate’? No? Well I suppose I wouldn’t either if you put it like that, but you should want to.

I mean, check out this perplexing little epic - isn’t it great? Does it not bespeak some dark intelligence that might help you in your life, as you reluctantly navigate the world outside? Fine, fine whatever.

Labels: Future Of The Left