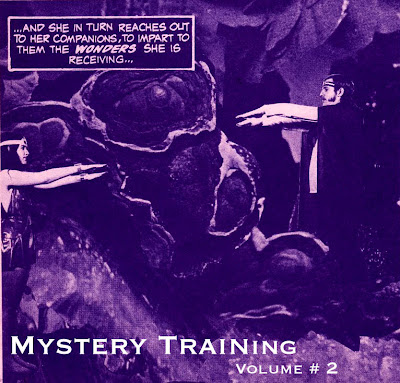 For anyone who enjoyed my first wide-ranging type psychedelia mix CD a few months back, here’s volume two. As before, the overriding theme of this disc didn’t become clear until I started listening back to all the tunes I’d thrown together and saw a pattern emerging, proceeding to tweak accordingly.

So basically: this edition focuses mainly, though not exclusively, on exploring various strains of peculiarly British weirdness. Not the more garish, colourful brand of British weirdness defined by the ‘60s cultural explosion though, mark you. More like the murky, forbidding, timeless kind of British weirdness that always seems to emerge when you scratch away the surface of our nation’s (counter)culture, offering a path into the blackened psyches of our island nation’s more… peculiar.. inmates.

Aside from a few bigger cult names, there are a wealth of awesome private press / below-the-radar finds represented here, so I offer my thanks to blogs like Mutant Sounds and Lost In Tyme for slinging them into my path. Of particular interest to some will be The Fates, an all-female wiccan collective led by Una Baines, ex of The Fall, whose album ‘Furia’ offers a fascinating mixture of mysterioso pagan folk and feminist new wave pop (one for the ‘REISSUE NOW PLEASE’ file). Another favourite of mine are The Left Handed Marriage, a trio of talented kids who spent the late ‘60s stuck well away from the action in far North London, but who nonetheless recorded an album’s worth of startlingly strong, characterful acoustic pop-folk tunes that help reveal a very different England to the one in which The ‘Stones and Jimi Hendrix were strutting their stuff in but a few miles away. Dark (I keep wanting to call them The Dark) were an early ‘70s combo whose two private press albums are quite well known amongst psyche/prog fans and have subsequently been reissued etc, but, man, ‘Maypole’ never gets any more normal. As to the likes of The Lazily Spun and The Chemistry Set… well I don’t know a damn thing about them I’m afraid, although I’m quite happy with that state of affairs, being a fan of mystery and such.

Of course, that aside, we’ve also got contributions here from South Africa (Super-Eagles), Japan (OOIOO), what is now Iraq (Said El Kurdi), and the USA (Pearls Before Swine); maybe a few of these could serve to add a nice frission of post-Imperial guilt to proceedings, if you want to carry on the British theme? Or simply some incredible music, if you don’t. That Super Eagles track is so purely wonderful, it’s hard to justify the existence of any mixtape that fails to include it.

The other presumptuous, unintentional synchronicity that seem to crop up across these songs concerns the hermetic nature of love, and the need to protect it from worldly cynicism. Make of that what you will.

Oh, and I guess some people (who like their genres cut n’ dried) may question the inclusion of The Slits on a psychedelia compilation. So answers on a postcard if you’ve got a better guess at where the hell a track like ‘Life On Earth’ is supposed to be filed.

To get you in mood, here’s the video to The Troggs ‘Night of Long Grass’, which I think exemplifies the atmosphere I’m going for with this one better than any amount of talkin’:

1. Bermuda Triangle – Nights in White Satin
2. Super Eagles – Love is a Real Thing
3. OOIOO – Be Sure to Loop
4. The Troggs – Night of the Long Grass
5. Television Personalities – Scream Quietly
6. Belbury Poly – Caermaen
7. The Lazily Spun – The Rock
8. The Lazily Spun – The Whole
9. The Fates – Sheila / She Beats My Heart
10. The Chemistry Set – Under The Valley
11. The Caretaker – From Out Of Nowhere
12. The Deviants – Billy The Monster
13. The Left Handed Marriage – Civil Servile
14. Dark – Maypole
15. Said El Kurdi – Kassem Miro
16. The Slits – Life On Earth
17. John Cage – Experiences No.2 (vocal: Robert Wyatt)
18. Delia Derbyshire – Blue Veils and Golden Sands
19. Pearls Before Swine – Guardian Angels